What Is the Best Database for iOS Apps?

The iPhone is the most popular smartphone in the world. You can probably guess that the Apple App Store is just as popular. It was only in 2008 when the modern app was invented and the first iteration of the Apple App Store featured 500 of them – which though small in number is a large market for anyone user.

Of course, the market has far surpassed that initial milestone. Now, the Apple App Store has 2.2 million iOS apps available to its users. In 2018, there were 194 billion downloads. With a market, this substantial, mobile app development can be a lucrative step for your business.

But with mobile app development comes important decision-making related to the tools and frameworks you will use to deliver results. While you’ve probably heard about programming languages often enough such as Swift or Objective-C, databases rarely get enough attention.

Although making an app that looks pretty and entertains the user is important enough, databases are just – if not more so – important. This is because databases hold all the information necessary for your users to have truly interactive experiences with your app.

Keeping all this in mind, you may want to know what the best database is for your iOS app. Stay tuned, and you just might find out.

What Is a Database?

A database is a structured collection of data. Pretty much any digital or technological tool you know of uses a database to manage data.

For example, the contacts in your phone work as a sort of database for you to use and edit contact information.

In very much the same fashion, mobile apps rely on databases as well. Not only do application databases help run applications in the first place, but they can also control any user input that’s entered.

What happens in a mobile app is a direct result of saving, filtering, loading, searching, and doing whatever else may be necessary with the data your app manages. These data manipulations are crucial for a functional app.

And to the same end, choosing the best database for your iOS app is similarly crucial. Picking the right iOS database is a major part of building a successful app.

The 3 Best Databases for iOS Apps

Of course, in order to choose the best database for your iOS app, you have to know what your options are. Let’s take a look at some of the popular iPhone databases available to you. 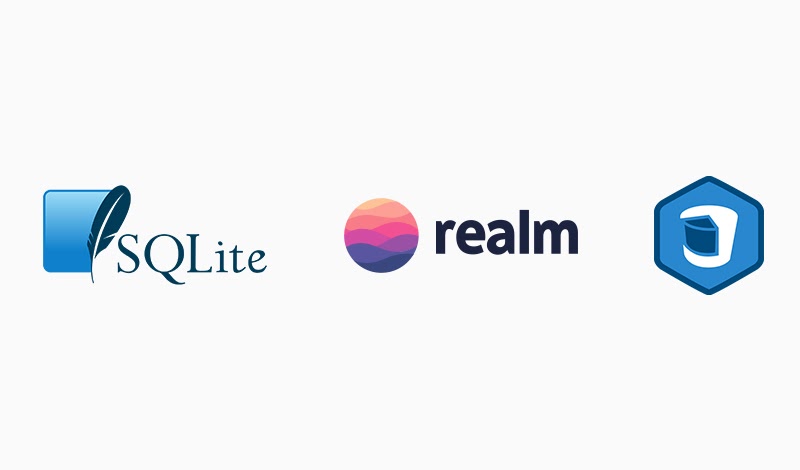 SQLite is the most used database engine in the world. It is technically defined as a relational database management system (RDBMS). This is a common type of database where data is stored in tables as opposed to a flat-file or hierarchical system.

The database is organically integrated into the app in turn for running as a separate service or in the background. SQLite is also very lightweight.

There are a couple of reasons why developers choose to use SQLite. Some consider it to be the best database for their iOS app because of its easy implementation.

For instance, as it is lightweight, embedding the software into devices such as mobile phones and digital cameras is a breeze. There’s also no installation needed and zero-configuration.

SQLite is highly portable meaning it’s compatible on virtually any platform from Windows to macOS to Linux to Android and naturally, iOS. In the same vein, SQLite can bind to a variety of languages including C++, C#, JavaScript, Objective-C, PHP, Ruby, Java, and Python.

Essentially, this means that the database is object-oriented, enabling developers to code relationships between objects. Unlike SQLite which more or less operates on the SQL database language, Realm uses C++ at its core.

Though Realm is relatively new it’s still a strong competitor for the best database for your iOS app. It’s actually specifically designed to work with mobile operating systems like Android and iOS as well as Xamarin and React Native.

The advantages of Realm stem from its modernity. Apart from having an easy installation, Realm is faster than SQLite and CoreData.

Scalability is also a noteworthy feature of Realm. Realm can support a large number of users and a significant amount of data. These are plainly attractive features for any database.

For developers, the Realm has clear and well-written documentation. This makes information easily accessible leading to quicker development processes.

There are also support networks across Twitter, Github, and StackOverflow.

Core Data is a framework sponsored by Apple itself.

You can use Core Data to save permanent app data for offline use, cache temporary app data, and define data types and relationships.

Technically, Core Data is a persistence framework, not a database itself. Ironically enough, Core Data has the capability to use SQLite as a database.

A persistence framework is a type of middleware that stores data into a database. They exist as an abstraction layer between a database and app data.

Some might say that Core Data’s close relationship with Apple makes its the best iOS database for Apple-specific languages like Swift and Objective-C. But there are other features that truly give Core Data an edge for the best database for your iOS app.

Core Data is, first of all, faster than SQLite at fetching data. In addition, the framework has built-in features that ultimately reduce the total amount of code developers need to write by up to 70%.

Data can be organized into binary, XML, or SQLite stores. Ultimately, this makes development easier for software engineers and they don’t need to be particularly familiar with multiple database languages.

Which Database Should You Choose for Your iOS Application?

The best database for your iOS app depends on what your business really needs for its mobile app. During selection, there are several characteristics you should consider carefully including speed, size, and scalability.

Speed will affect how quickly the data is retrieved and manipulated.

Database queries will take some time but the sooner the process gets done, the more your users can appreciate the high performance of your app.

Speed and scalability are closely related. A scalable database needs to be performant and fast.

There’s also some distinction between write-heavy and read-heavy database solutions. And you should take this into account when choosing a database.

Ideally, if you expect your business and/or mobile app to grow and thrive in the market, then you’ll need a database that can handle the growth.

With every decision comes some gives and takes. Speed, size, and scalability should be the core concerns for the database you have in mind.

A dedicated iOS developer may be better able to help you choose what database to use for your mobile app.

Trio can help you learn more about databases as well as anything you need to know about mobile app development.

When you’re ready to start developing, remember that Trio has qualified iOS developers to get you through every step.

What Is a Database?

A database is a structured collection of data. Pretty much any digital or technological tool you know of uses a database to manage data.

What are the 3 Best Databases for iOS Apps?