Who Uses Angular in 2022? 12 Global Websites Built With Angular

Evidence shows that modern web frameworks like Angular are on the brink of overriding traditional frameworks like jQuery. Although it’s easy to get caught up in Angular’s popularity trends and near decade-long history, you might be wondering what drove Angular to be so popular and how top fortune 500 companies leverage this front-end web framework to their advantage.

With tech giants that like Microsoft and Samsung using Angular, the platform has gained a solid reputation. Over time, Angular has slowly been brought into the limelight, convincing big-name companies, such as Deutsche Bank, PayPal, and Upwork of its quality.

Whether it’s a massive online payment system like Paypal using AngularJS for their checkout/transaction portals, or Delta airlines deploying Angular to display real-time airfare data, the number of diverse companies that use Angular has increased exponentially over the last decade.

In this post, you’ll take a look at twelve, cutting-edge companies that use Angular in their present-day web app development pipeline, listed as follows:

With the framework’s initial release in 2016, it is now maintained by Google.

According to Angular’s official documentation, Angular is more or less a structural framework for building dynamic web applications.

Angular lets developers use HTML as a base template language, allowing them to extend HTML’s syntax to clearly and succinctly express app components with only a few lines of code.

By taking advantage of data binding and dependency injection, Angular eliminates excess code that developers would normally have to write.

Since this all happens within the browser, Angular is one of the most ideal partners to couple with any server technology.

How Companies Use Angular

Many companies use AngularJS as the frontend of their MEAN stack, consisting of the:

Angular boasts an array of core features, making it a key competitor with the React framework.

These features are listed as follows:

Angular automatically synchronizes data between the model and view components.

This enables developers to seamlessly create interactive applications without worrying about manually pushing and pulling data.

For companies that use Angular, this translates to saved time and the cost of hiring an armed force of web developers just for the purpose of pushing and pulling data sources.

By deploying PWA, developers can offer app-like experiences to their audience on their websites.

Ionic allows developers to ship apps to the IOS app store, Google Playstore, and web application(s) simultaneously without having to hustle to create apps separately for each platform.

In the long run, this saves added time and effort, securing return on investment sooner rather than later.

Related reading: Vue.js vs. React: Which Is Better?

In contrast to other front-end tech stacks, Angular was developed as a low code framework.

What Are the Advantages of Angular?

Popularly dubbed as the framework of “What HTML would have been if it had been designed for building web applications,” Angular spotlights technical and qualitative advantages that give it that extra edge amongst the ranks of web development frameworks.

Below are some of the top benefits of using Angular in your front-end development pipeline. 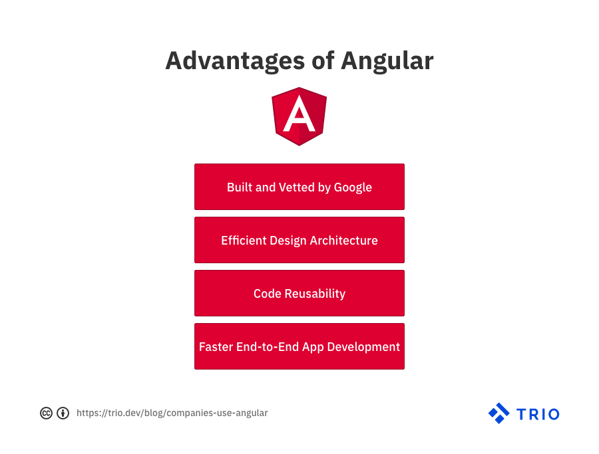 Built and Vetted by Google

Dating back to its initial release in 2016, each and every Angular version has been maintained by dedicated Google engineers.

Google’s continuous maintenance of Angular has established a huge community out there for individuals and organizations to learn from.

This also means that clients can get what they want faster.

Since Angular is open-sourced, companies that use Angular can rapidly outsource and secure assistance from vetted front-end developers.

In today’s tech world, many companies that use Angular handle web apps with hundreds of features and components while still juggling page loading time and user engagement functionality.

Ten years ago that would’ve been nearly impossible.

However, in 2020 we’re seeing a massive upsweep of tech giants, with the likes of Google and Microsoft integrating Angular to manage their most prized web apps.

This allows companies that use Angular to effortlessly transfer features written in earlier applications to new version releases or entirely different web apps.

This idea of reusability across small-scale and large-scale applications is what makes Angular a leader in the web app industry.

MVC is a software design pattern that reinforces the web app development process.

The MVC architecture gained popularity with organizations for isolating application logic from the user interface layer and supports a separation of concerns.

Before MVC’s inception, developers would normally struggle with integrating logic, and things would get extremely disorganized.

But with Angular’s integration of MVC logic, applications become easier to update, development time is faster, and collaboration between multiple developers is enhanced. 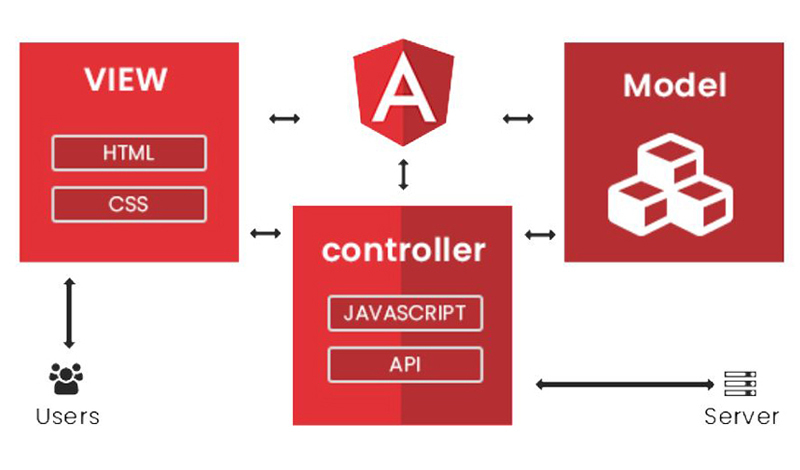 12 Global Companies that Use Angular

Industry websites of all kinds have leveraged Angular to their advantage, anywhere from airline customer transaction systems to some of the most popular email services.

The following list of companies that use Angular all had one common motivation – using and scaling web applications to fulfill the demands of their client base.

With Angular, they were able to accomplish just that.

Among the companies that use Angular, Microsoft took one of the boldest approaches.

Microsoft Office’s expansion into the 21st century was partly due to its efficient migration to the web.

The free online web app features most if not all office features condensed into a single-page view, allowing businesses and users to collaborate on teams and create documents.

Deutsche Bank AG, a multinational investment and financial services company, uses AngularJS for the front-page of their developer portal.

Their developer portal features the Deutsche Bank API program, acting as an access point to millions of global organizations looking to integrate Deutsche Bank transaction systems into their web software.

Mixer is a free video game streaming website and service developed and released by Microsoft, ranked highly among similar competitors, such as Twitch and Youtube Gaming.

In contrast to other companies that use Angular, Mixer integrated it into a video streaming use case.

Since Angular allows single-page data to be updated in real-time, Mixer employs the framework for essential game streaming features.

This includes hosting fast live streaming, commenting on streams, co-hosting from your own channel, and receiving alerts when channels you follow start live streaming.

Santander Bank initially organized its services in Spain, slowly establishing its principal market in the Northeastern United States since 2013.

According to Santander’s Global Tech and Operations page, Angular is employed by its team of over 2,000 people in seven countries to create web-based financial solutions.

Since Gmail was developed as a single-page emailing application in 2004, it served as the perfect use case for integrating AngularJS.

Every time a user opens Google's mail service, the web app loads one single HTML page whilst dynamically updating information based on new messages or notifications.

Whether you’re reading an email, drafting a new message, or switching tabs, AngularJS handles every action within a single webpage.

With Angular, stories and articles can self-update seamlessly within seconds of publication for subscribers to view.

Forbes established a clear precedent as one of the large publishing companies that use Angular.

This is because Angular can handle the publishing demands of journalism in the 21st century.

Established in 2015, Upwork serves as the go-to freelancing platform for organizations and individuals to conduct business.

As of May 2020, Upwork has profited considerably, accumulating revenue in the range of $79 million to $81 million.

It supports rapid online money transfers and serves as a third party electronic alternative to traditional paper methods like checks and money orders.

Ultimately, it’s safe to say that Angular functions as the foundation behind PayPal’s responsive mobile and web application experience.

Grasshopper is a premier mobile application created by a team of passionate coders from Google’s workshop for experimental products, Area 120.

The application helps beginners ease their way into coding by using fun and easy learning methods.

Grasshopper uses Angular for its cross-platform applications for Android, and IOS.

Samsung has quickly established itself as a key multinational competitor in the electronics industry ever since its founding in 1938.

Among the companies that use Angular, Samsung distinguishes itself as a chief leader in the electronics sector.

Delta Air Lines is one of the most competitive airline carriers in the United States, with the front-page traffic of their website ranked fifth in the travel and tourism category.

Delta’s website went all out with AngularJS. Instead of sprinkling it onto its airline web applications here and there, they deployed the framework onto its homepage.

If you’re familiar with LaTeX, you’ll likely be familiar with Overleaf. Overleaf is a collaborative cloud-based LaTeX editor used for writing, editing, and publishing scientific documents/publications.

The first stable releases of Angular have only existed for around four years.

Let that sink in.

In less than a decade, Angular’s globally branded reputation and association with big names such as Google, PayPal, and Microsoft, has established one of the largest web development communities.

If there’s one takeaway from this article, it’s this:

Angular is a universal framework with the ability to transform the functionality and interactivity of your web applications for the better.

Single-page web apps like Gmail and Upwork made Angular work for them. In 2020, there is nothing stopping smaller enterprises from melding Angular with their existing tech stack.

In order to make Angular work for your business, you need senior-level web developers with expertise in creating and scaling web applications with JavaScript.

Here at Trio, our developers can get some of your boldest web development projects done, large or small.

Learn more about how you can hire qualified Angular developers for your project today!

What Are the Advantages of Angular? 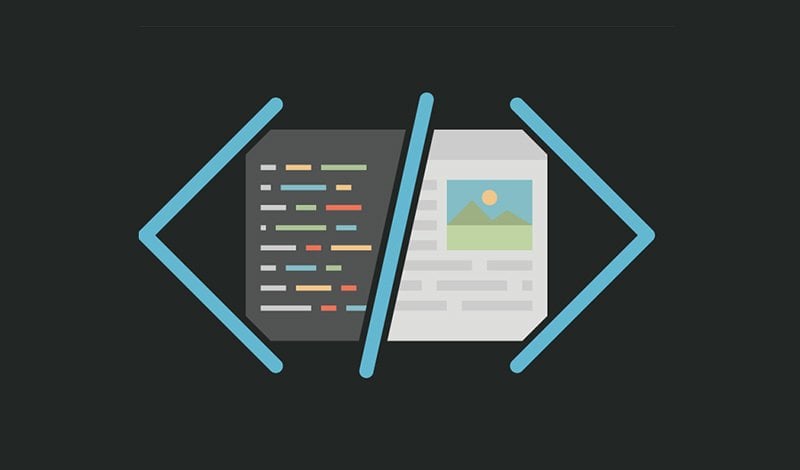