What Is Cross-Platform App Development?

Cross-platform app development is a business-savvy means of addressing consumer needs in an efficient manner.

This is likely because of the obvious merits of cross-platform app development that your business can take advantage of if you so desire.

Before you start building a mobile app, or any software development project for that matter, it’s important to understand the objectives you plan to meet and what technologies will move you forward.
If mobile app development is your goal, then you should consider the various ways in which you can develop a mobile app.
To learn more about cross-platform app development, how it can benefit your business, and the challenges to using this development approach, stay tuned!

What Is Cross-Platform App Development?

Cross-platform app development refers to the development of software that is able to run on multiple devices.

Multi-platform compatibility is a pervasively desirable trait in the software development realm. Even outside of software development, it should come as no surprise that businesses want their product to be available to as many consumers as possible.

On the other hand, the complexities of software development often mean decreased portability. That is, software developers are routinely unable to use the same software across numerous computing environments.

Yet the native programming languages for Android only include Java and Kotlin, or Swift and Objective-C for iOS.

While native development suggests severe limitations when it comes to accessibility from one device to another, most software experts believe using native tools elicits better performance.

The underlying question is whether or not cross-platform frameworks and technologies can extend enough flexibility to the effect that performance concerns are negligible.

What Are the Advantages of Cross-Platform Development?

The advantages of cross-platform development all play into the optimization of your business strategy. By nature, this perk trickles down into the efficiency of your software development process. 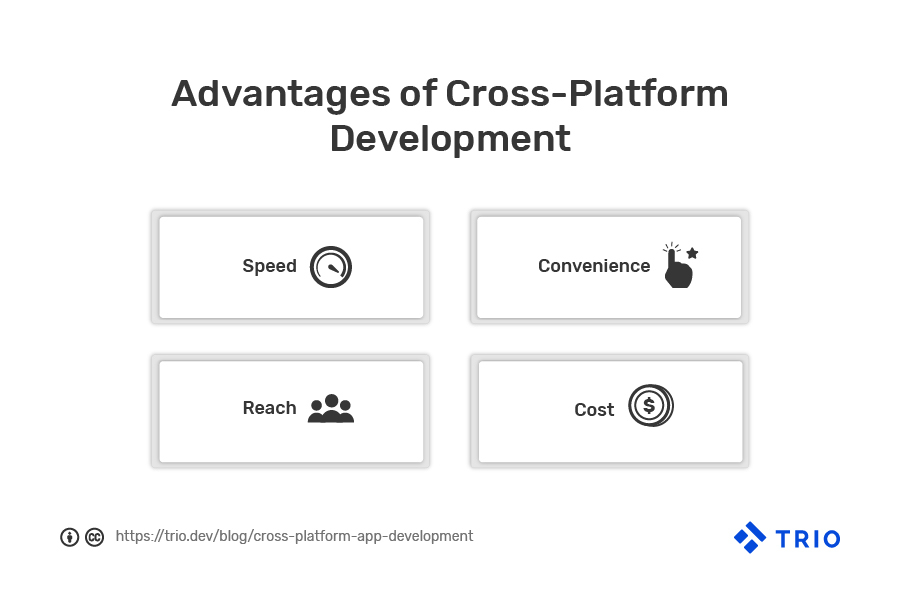 In native app development, businesses who want to create mobile apps for all smartphones, no matter if it’s an Android or iPhone, must create two distinct apps in the native technologies of each platform.

Of course, this means more time spent in development, more development teams to work with, and more codebases to maintain.

Cross-platform development would alleviate these setbacks, leading to a faster time-to-market (TTM) — something every stakeholder in the project would undoubtedly appreciate.

Since your developers will not have to write unique code for each platform, they gain the tactical advantage of code shareability. With this convenience, developers can plug reusable code components into several of their future projects.

For instance, updating and managing your singular app that is available across multiple devices only takes a jiffy. And it’s easier to respond to user feedback if there’s only one codebase to reference.

Setting up automated processes for app maintenance should be a breeze as well. You won’t have to navigate the different software architectures of varying platforms.

Naturally, using cross-platform development means you have an easier time making your app accessible to a wider audience.

Cross-platform apps work on multiple platforms, including the web. That’s a far-reaching range, which can only be a good thing for the growth of your business.

Along with a quicker TTM which translates to a timelier return on investment (ROI), there are other financial gains to utilizing cross-platform development.

First, you can look forward to a less strained budget. Native app development can be resource-intensive for those who want their app to be widely accessible on multiple platforms.

To make this happen, businesses must have specialized developers for each platform and fund their respective projects. This can hike up costs quite fast.

Cross-platform app development almost totally diminishes any budgetary concerns. In addition, many cross-platform development tools allow developers to build web apps too, meaning an even greater ROI when you expand your reach to a whole other platform!

What Are the Disadvantages of Cross-Platform App Development?

Unfortunately, the overall consensus is that hybrid and cross-platform development are lacking in this area.

The extra abstraction layer that these development approaches must implement to extend compatibility to a wide variety of devices notably slows down performance.

Cross-platform development requires constantly readjusting the design and functionalities of a cross-platform app to ensure it can adapt to the diversity of platforms it’s meant to run on.

These adaptations bog down the development phase and you can only hope that the effort is worth the expense.

Even if for some reason, you determine that performance and compliance issues are a small price to pay for an otherwise enticing development approach, you must think of software development within the context of your business as a whole.

User experience (UX), for one, will be the larger cost of the drawbacks outlined above. UX is a critical constituent in satisfying customer needs.

Users who have positive experiences using your software product can play a fundamental part in your business funnel. You can guide the customer journey towards lead conversion, presenting a glaring channel for the success of your business.

In contrast, when UX is in flux, this can jeopardize your growth potential. Cross-platform app development does not promise a horrible UX — as clearly many businesses still choose to use cross-platform development — but its limitations are still worthy of consideration in the grand scheme of things.

Other than loss of performance, most software experts believe that cross-platform development poses security risks.

Frequent updates for native apps assure that the software is less vulnerable to cyber attacks. But cross-platform apps tend to have a lower update frequency and are left more vulnerable as a result.

That said, fierce supporters of cross-platform development contend that there are many ways to address the security issues that come with the territory.

And security is a concern no matter the development approach. Your biggest priority should be finding developers who are qualified enough to manage any problems that you encounter in the maintenance and development of your app.

What Is the Difference Between Native and Cross-Platform App Development?

Cross-platform app development may differ depending on the technology in question, as there are several, but generally, any app built through cross-platform development offers multi-platform compatibility.

Though these apps may appear similar in appearance and functionality, they would need different codebases to accommodate the needs of native app development.

What Is the Difference Between Hybrid and Cross-Platform App Development?

The main difference between hybrid and cross-platform app development is the technologies developers use for each development approach.

Hybrid app development utilizes a combination of native and web technologies by definition. The name ‘hybrid’ alone should be a good indicator that the native elements of hybrid development are just as important as the web elements.
To clarify, developers build hybrid apps with traditional front-end web development technologies -- JavaScript, CSS, and HTML.
Hybrid app developers also use some native mechanisms to improve the functionality of hybrid apps, essentially coding in minor adjustments depending on the platform.
Via WebView components, a hybrid app can express itself as a classic mobile app that can be installed on the app store. What’s more, users can access a hybrid app on any mobile platform.

There are a number of differing technologies for cross-platform development. Many of them authorize nearly the equivalent of native development.

Noting the disadvantages of native app development, professionals in the software development industry have been carefully researching and building solutions for cross-platform app development for some time now.

Below, you will learn about several tools enabling cross-platform app development:

Xamarin is the progeny of .NET. The .NET framework is a cross-platform, open-source developer platform from Microsoft.

It is equipped with tools and libraries empowering developers to build an assortment of apps ranging from machine learning to game development.

The platform encourages the use of Microsoft languages like C#, F#, and Visual Basic. Xamarin itself uses C#. Using only this language, rather than several native languages, you can build Android, iOS, and Windows apps.

Four key technologies make up the crux of Xamarin:

Through this method, Xamarin.Android and Xamarin.iOS applications compile to a native assembly in either Java or Objective-C.

The UI toolkit of Xamarin.Forms targets the form factors of mobile, tablet, and desktop devices on contrasting operations systems.

Flutter is both a UI framework and an SDK. Developed by Google, Flutters makes use of Dart, a markedly fast object-oriented programming language from Google.

With Flutter, Dart developers can build mobile apps for iOS and Android and develop software for computer operating systems, including Linux, Windows, Mac, and Fuschia.

Another impressive tool of Flutter, Skia, is a graphic engine that renders seamless UIs on heterogeneous platforms with few compatibility issues.

Appcelerator is a private mobile technology company. Its most popular product is Titanium, an open-source SDK for building cross-platform mobile apps from a singular JavaScript codebase.

Titanium’s core features are as follows:

By exercising the abilities of JavaScript engines, Titanium interprets JavaScript code into a native apparatus.

Because of Hyperloop, developers have direct access to native APIs in spite of using JavaScript. And overall Titanium users can share up to 95% of their code.

Sencha Touch, a product of Sencha, is a UI JavaScript library for building mobile web applications that look and feel native. The framework is based on HTML5.

The high-performing UI components of Sencha are designed to run on multiple mobile web browsers from Google Chrome on Android to the Kindle Fire web browser.

Businesses use Sencha for creating universal, performant apps that enhance the capacity of a mobile web browser.

According to the 2020 Developer Survey, React Native places sixth for most popular frameworks and technologies outside of web development.

Facebook created React Native in 2015, in search of the ‘best of both worlds’ in terms of providing its user base with a truly native experience.

At first glance, PWAs appear to be mobile apps, but apart from their appearance alone, they are in essence websites. They are built using web standards but have the sharp and quick performance of a mobile app.

Quantum’s objective is to support enterprise applications. Chatbots and immersive augmented reality experiences are a few examples of software projects you can build with Tenemos Quantum.

Corona is a cross-platform framework based on the scripting language Lua. Lua is a fast and powerful language behind many popular franchises, Angry Birds being one you’re sure to know.

Inside Corona, you can build apps and 2D games for iOS, Android, Amazon Fire, Windows, and even Apple TV, Android TV, and Fire TV.

Within the framework, you can call any native library or API like that of C, C++, Objective C, and Java.

Unity is a cross-platform game engine for 3D and 2D games. The engine supports a generous outpour of platforms across mobile, virtual reality (VR), desktop, console, and TV machines.

Cuphead, Temple Run, Ori and the Blind Forest, and Subway Surfers are all the result of Unity development.

This particular development approach is distinctly different from hybrid app development, which is contingent on WebViews for any native execution.

For cross-platform development, there are a myriad of ways to bring about multi-platform reach. React Native is the most popular framework successfully completing that objective, with Flutter, Xamarin, and Unity being similarly notorious.

What is cross-platform app development?

Cross-platform app development refers to the development of software that is able to run on multiple devices.