What Is Node.js Used For? 4 Examples of Node.js Applications and Uses

Node.js is used for back-end development with JavaScript. Web developers as of late having been optimizing their tech stack by implementing this far-reaching technology.

Every competent web developer knows that they need a solid grasp of JavaScript in order to build any modern web application or website. After all, JavaScript is the premier programming language for front-end web development; or rather, it is the only language.

But with so many tools available to manipulate and enhance the use of JavaScript, just knowing the programming language you’re going to use for your next software project isn’t enough.

As an illustration, flocks of JavaScript developers have been opting to use Node.js as a back-end technology. In fact, as of a 2020 Developer Survey by StackOverflow, Node.js is in the top ten of most loved languages or technologies among developers.

Node.js is versatile. Among the many uses of the software, you will learn about four applications of Node.js:

Take a closer look at several Node.js examples explaining precisely when and where to use this JavaScript-based tool.

Node.js is an open-source, cross-platform runtime environment for JavaScript. First released in 2009, it provides web developers a platform to write, test, and debug JavaScript code outside of a browser.

While Node.js does not change the syntax, structure, or really anything about JavaScript itself, it does come equipped with many application programming interfaces (APIs) that extend the capacity for back-end development in JavaScript.

Support for file systems, HTTP requests, and child processes glimpse some of the features offered towards this undertaking. The same cannot be accomplished in a browser so these Node.js examples of back-end agency are thoroughly exciting to many a web developer.

This slogan means to convey the enthusiasm of web developers who appreciate the ease of using a singular programming language – JavaScript – throughout their tech stack. In other words, Node.js projects make full-stack development an attractive reality. And developers love to see it!

Naturally, like anything that has to do with the mere mention of JavaScript, developers use Node.js to build dynamic websites and web apps. Current Node.js examples of major websites thriving thanks to its platform include the likes of Netflix, PayPal, LinkedIn, and more.

These names are not underground by any means. Node.js is a stable and popular technology used in the everyday tech stacks of web developers big and small. Most of these companies saw a drastic improvement in speed when they adopted Node.js.

From a technical side, this is likely because Node.js provides an environment for non-blocking, event-driven servers. Non-blocking or asynchronous i/o refers to how operations execute in Node.js.

In synchronous or blocking programming, an operation must be finished before starting another. For instance, if a web server is asked to open a file and return the content to the client, the process that must occur is quite exhaustive.

A task is sent to the computer’s file system. The file system opens and reads the file. Nothing else can happen during this operation so there is a waiting period. Then the content is returned to the client. Now, another request can finally be handled.

Node.js handles file requests in a much more efficient manner because as it is asynchronous multiple things can happen at once. The task is sent to the computer’s file system. And then Node.js is ready to handle the next request!

Similarly, Node.js is event-driven, a programming paradigm that is designed to respond to user actions such as mouse clicks or key presses. Although theoretically, all programming languages can carry code of this nature, an environment like Node.js makes the paradigm far easier to implement.

This line of coding enables asynchronous programming and to a larger extent leads to faster overall performance. Arguably, this is one of the bigger benefits of using Node.js.

Related reading: Node.js vs. PHP: Which Is Better For Your Business?

Looking for a bit more straightforward Node.js examples? The following Node.js application examples should give you a more detailed understanding of what Node.js can do for you. 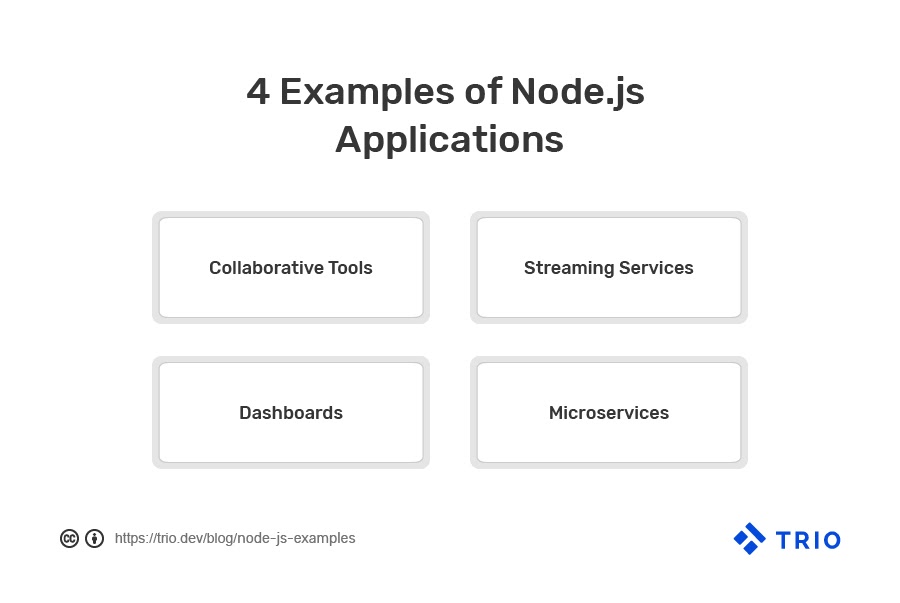 Like mentioned, Node.js specializes in asynchronous programming, allowing for multiple things to happen at once. Such an ability is especially useful for programs that must facilitate real-time processes and operations.

Co-collaborative features like document editing is one Node.js example of this in practice. Video conferences and instant messaging also rely on the same technology. WebSockets is a Node.js API rendering event-driven, two-way interactive communication.

With the birth of smart devices came the boom of streaming services. Simply defined, streaming services are platforms that permit users to watch videos or listen to music from a widely accessible internet hub.

Netflix, of course, is probably the most popular Node.js example of streaming in action. With a small monthly fee, Netflix users can choose from a plethora of films and series to watch any day of the week.

Node.js has a built-in module for streaming capable of transmitting large amounts of data chunks in a sequential fashion. Because of this, developers won’t need to temporarily store or cache data in the application memory.

Dashboards are a great way to effectively and easily strengthen the user experience (UX) of your web app. Your app may offer the same essential services to every customer but dashboards cater to the customer’s individual experience and history within your app.

Web apps can use Node.js on their server-side to provide immediate updates to a dashboard user interface (UI). Server-side rendering (SSR) generally signifies faster load times as it eliminates the need for browser-to-server round-trips.

In effect, customers will have a satisfactory impression of your app’s UX and UI.

Microservices is an architectural style where an app is managed not as one unit but as a collection of services. Businesses opt for this style because they can be easier to manage in maintenance in testing. They can also be deployed independently.

NASA is actually one of the many major enterprises using Node.js. It also happens to be a fruitful Node.js example for the moment. Using microservices, NASA was able to migrate all its data to the cloud.

There’s a pretty in-depth case study that explains all about how Node.js keeps astronauts safe and data accessible.

Now that you know what your business can do with Node.js, trust that utilizing this software will bring you the function and speed to uplift the spirits of any developer.

However, you’ll need developers in the first place if you plan to do any spirit uplifting – or developing for that matter.

At Trio, you’ll find highly qualified developers that can whip up any of the four Node.js examples mentioned not so long ago and add a few sprinkles on top as well.

If you want to do something more, don’t worry. Trio still has you covered. Our developers can adapt to your business and roll with new challenges as they come along.

Node.js is an open-source, cross-platform runtime environment for JavaScript. First released in 2009, it provides web developers a platform to write, test, and debug JavaScript code outside of a browser.

Node.js is used for building dynamic websites and web apps.