What Is Object-Oriented Programming (OOP)?

Object-oriented programming defines a mode of programming that orients itself around structural objects with related properties.

Organization plays a critical role in almost every process, from domestic household duties to project management. Programming is no different.

While the intent of programming is to send instructions to machines, doing this line by line in a sequential fashion is not always the best approach to such a task.
By conceptualizing code in terms of objects and classes, developers can build software more flexibly and intuitively than otherwise.

This method of organization has been used at length to write clean, maintainable, and most importantly, reusable code.

What Is Object-Oriented Programming?

Object-oriented programming (OOP) is a programming paradigm that uses the concept of objects to construct well-defined, manipulable pieces of code.

Integral to the core of object-oriented programming is the manipulation of objects. Objects contain data and code which hold properties, procedures, and functions.

To illustrate the intuitive nature of object-oriented programming, compare an object in programming to an object in real life.
For example, a car is an object with distinguishable qualities like its color and type. A car can also drive.

Demonstrating the behavior of a car in a program using procedural or structural programming would no doubt be difficult.

With object-orienting programming, you can generate a car class and code specificities of the object inside the class.

Though the details of this undertaking are more drawn out, with object-oriented programming you can assign the defining aspects of the car and control its behavior with a simple function call.

Within a class, programmers must define the variables and methods that its corresponding objects can reference.

Given the car example, a class would denote the properties of the car object, encase the car’s functionality, as well as declare the car as a class in the first place. 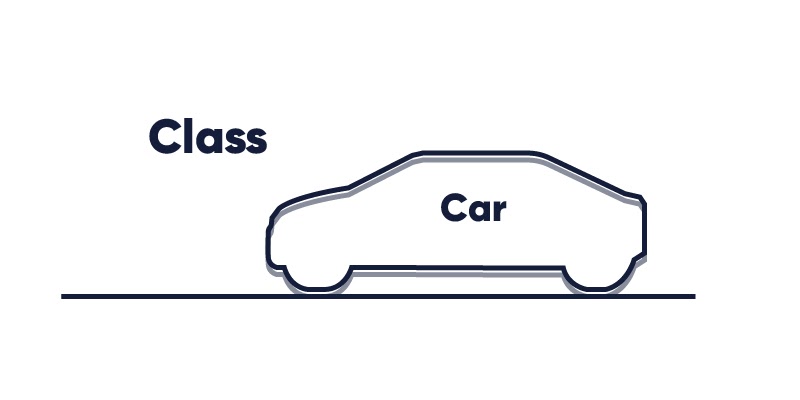 Attributes (or variables) refer to the characteristics of the object. Appearance, state, and other qualitative traits are common object attributes.
Class attributes in combination with object instances differentiate objects from one another.
The following program demonstrates a class declaration in Python:class Car:

Programmers also must define methods alongside attributes. Methods encapsulate functions that handle the data and behavior of an object instance.

In a car, a drive method might be appropriate. You can define such a method right below the car’s attribute definitions.

Though it is possible via code to render an actual car and simulate a driving application, programming this method is a bit more complex than the lines of code below.

Objects exist alongside classes. They are essentially data fields with distinct structures that the programmer can determine.

Once you call an object, the program creates an instance. An instance is a specific object generated from a class.
To call an object, you will need to provide information relevant to the class, such as the particular color and type of the car.

The code above will formally establish a concrete instance of the unique automobile object.

Then, you can glimpse how the drive method works in action.
automobile.drive()

Altogether, by implementing all the concepts you just learned, you will have the following Python program.
class Car:

As a result, the output on your computer screen will read, “I’m driving a red Sedan.” 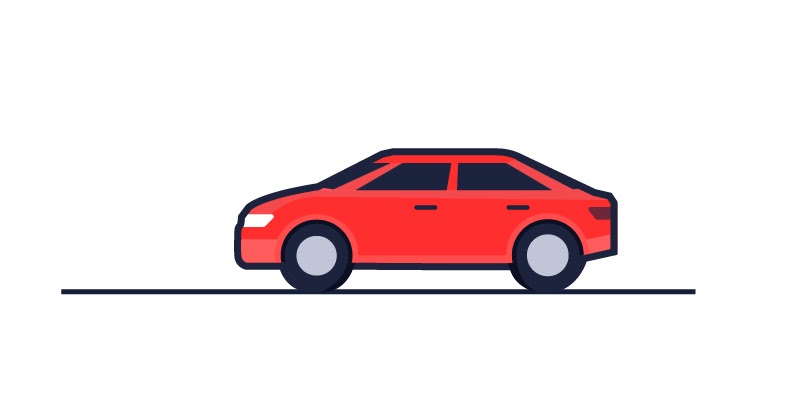 Encapsulation is the binding of an object’s state and behavior together. This occurs when attributes and methods are wrapped into a single unit and/or class.

Because of encapsulation, class fields are not directly accessible to the public. In addition, encapsulation offers flexibility and maintainability.
For instance, in the automobile object, the Car class can be hidden from the rest of the program. The benefits are reusability without concern for the specific details on which the object relies and cleaner code overall.

Abstraction shares similar benefits and origins to encapsulation. The principle of abstraction applies when a program only reveals to users data that is relevant to the object.

Of course, abstraction plays into or onto the idea of encapsulation. Object-oriented programming warrants that programs encapsulate object data within a class so that complex mechanisms can be abstracted.

Scalability is a major perk of abstraction and OOP in general. Large codebases make for messier changes and maintenance.

With encapsulation and abstraction working together, programmers can call objects without needing to access or open in-depth class mechanisms.

In real life, there are plenty of cases that are equivalent to abstraction in programming.

For one, smartphones have only a few meaningful buttons on the device itself. These buttons permit users to express functionalities without being bogged down by the complexity of the technology.

Likewise, an object is an abstraction of something behind the scenes that is far more complex than meets the eye.

When a program has multiple classes with related properties, inheritance can simplify the landscape. In object-oriented programming, child classes can inherit parent classes and akin features.

To exemplify inheritance, consider how the Car class can share properties with a larger category, like vehicles.

The lines of code here use ‘Vehicle’ as a parent class. ‘Car’ and ‘Bike’ are child classes that inherit the attributes of the parent class with little to no labor involved.

Polymorphism is the condition of an object being able to take on several forms. That said, polymorphism can take place in various ways.

Examples of polymorphism include:

What Are the Benefits of Object-Oriented Programming?

Object-oriented programming is so favorable because of its malleability. The ability to regard structures of code as objects in a programming environment empowers programmers to shape programs freely.

Modularity entails the capacity of OOP to compartmentalize code. If you ever browsed job listings for software developers, a basic requirement on almost every post is that the candidate knows how to write “clean, maintainable code”.
While muddying text on a computer screen is unlikely, the bigger a project is the more intimidating it can be to write several thousand lines of code. Not to mention, you will have to stare at the monstrosity every time you attempt to make a change.

Object-oriented programming encapsulates an enormous amount of information within a single class. Arguably, OOP allows for building programs quite literally inside of programs, which eases the development process as a whole.

You can use and reuse objects again and again throughout your program. What’s more, you can even import objects from outside the program.

Zeroing in on Python again, one of its premier modules is turtle. Turtle is a Python library that extends drawing tools to Python programmers.

But more than a drawing tool, turtle is a predefined object that demonstrates the grandeur potential of OOP. The Turtle object is essentially a marker instrument.

Using the turtle module, you can name your Turtle object, color it, and guide it. Repeated movements, courtesy of object methods, enables users to draw intricate shapes.

The relevance of all this is the mere convenience of being able to call an instance of a class and have full utilization of its capabilities. No prior context of the object is necessary to use its prowess.

After importing the turtle package, the user creates a graphics window and calls the object, naming it ‘trio’. The remaining handful of Python code traces half a rectangle.

Reusability is an extension of pluggability, another useful perk of object-oriented programming. You already know you can plug in objects whenever and wherever you want in your program.

But pluggability lends extra advantages that you may not be aware of. In particular, if a certain object presents problems in the debugging process, you can simply remove it. Add a different object as you wish.

Objects in the real world show similarities. When something breaks, you need only replace a few screws, in turn for upturning and fixing the entire machine.

Class declarations can be entirely hidden from public view. Though object-oriented programming does not mean to be a secretive endeavor, information-hiding can be superbly advantageous.

Apart from the act of writing code itself, visualizing and contextualizing a hefty mass of code can be mentally exhausting. By hiding the inner workings of an object in the interior of a class declaration, you only have to interact with an object’s methods.

What Are the Concerns Related to Object-Oriented Programming?

To be frank, there are not many downsides to OOP. But running massive amounts of code sheathed under a singular entity can be a strenuous task for any machine.

Larger programs are also a natural consequence of employing object-oriented programming principles. Given the chance to condense code, the outcome tends to be more code on the whole.

In other words, the most major drawback of object-oriented programming is that it will be difficult to compile.

At the same time, scalability is paramount for any business in the software development industry. And this can rarely be accomplished without object-oriented programming.

Python is an interpreted, high-level, general-purpose programming language. Developers choose Python for a variety of use cases.

As a class-based programming language, Java is designed to have few dependencies; thus, Java developers can look forward to uninterrupted reusability.

Java is known for being the official programming language for Android development.

Ruby stands out among other object-oriented programming languages as its goal is to perceive nearly everything written in the language as an object.

Yukihiro "Matz" Matsumoto, the designer of Ruby, created the language when he felt that alternative OOP languages like Python were not truly object-oriented.

Ruby on Rails is a beloved web framework stemming from the Ruby language.

C++, or ‘C with Classes’ is an object-oriented extension of C. C is a classic programming language that still ranks high in the TIOBE Index today.

Yet its extension C++ performs exceptionally well when working with embedded systems like smartwatches and medical machines.

C# is a language of the .NET framework, a product of Microsoft that guides developers in building applications.

Like C++, C# is also a middleware language that can work closely with hardware. C# is primarily used for game development in Unity.

Object-oriented programming is a valuable approach to software development that you should not take for granted. It’s likely that the developers on your team are already well-familiar with OOP principles and use them every day to optimize your processes.

Becoming more familiar with the methodologies that are upholding your business will ensure that you better understand what your organization is truly capable of.

To fully grasp how OOP can be beneficial to the software development process, you must take note of programming concepts like encapsulation, abstraction, polymorphism, and inheritance.

These OOP fundamentals garner many advantages for the common program, flexibility, and coherence being the overarching gains.

Hiring qualified software developers can help you get the best out of object-oriented programming and other important software principles. Work with Trio today!

What is object-oriented programming?

Object-oriented programming (OOP) is a programming paradigm that uses the concept of objects to construct well-defined, manipulable pieces of code.

What are the best object-oriented programming languages?

The most popular object-oriented programming languages are Python, Java, Ruby, C++, and C#.

What are classes in object-oriented programming?

In object-oriented programming, classes serve as blueprints for creating objects.