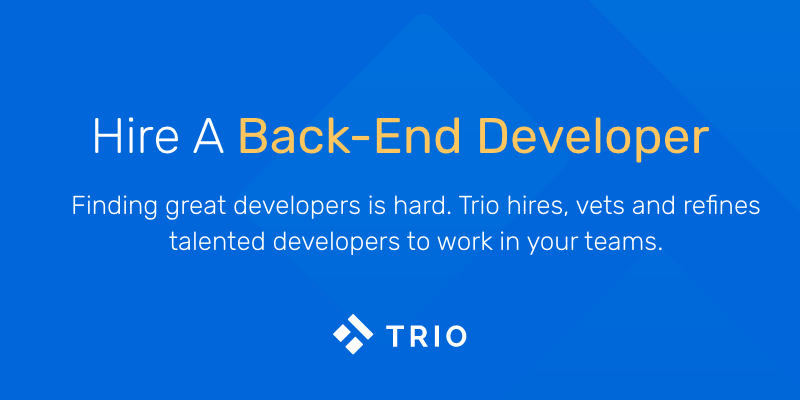 Back-end developers are in popular demand these days. Startups and small businesses looking to digitize their products look for back-end developers to build their business logic and create components or features that are indirectly accessed by a user through a frontend application or system.

Backend developers also create and maintain databases, data and application program interfaces (APIs). They are a necessity, and without back-end developers, you have no product.

What is the Difference Between Backend and Frontend Development?

Unlike frontend development, which focuses on the user interface that the end-user interacts with, backend has more so to do with models and business logic of a system. This can be seen as the engine or heart of your application.

In addition to business logic, backend development also has to do with handling APIs and databases.

What makes a good backend developer?

Good backend developers are able to solve complex problems. Every company has a unique problem they are trying to solve and that requires creating business logic that will increase in complexity as new features are appended to the application.

Backend developers are able to take a stakeholder vision and turn it into code that actually does something.

While all of that is very important, it’s only just the beginning. Web and mobile applications are systems, and backend developers must be proficient in design patterns such as MVC and MVVM in order to build clean codebases.

Then comes the databases, which can be either relational, NoSQL, or object-oriented. A good backend developer will have experience working with at least two of the three as well as some popular solutions such as MongoDB, PostgreSQL, or even Firebase if dealing with mobile.

What technologies should backend developers be proficient in?

When it comes to frameworks, there are only a few to choose from, which is a good thing. Below we’ve listed the ones that have truly stood the test of time and are currently hot today.

Backend developers can sort of grouped into either the startup or enterprise buckets when it comes to working with frameworks. Below is a list of frameworks geared towards startups. For enterprise-level frameworks, companies tend to leverage Spring, which is based on Java.

Rails is a very popular framework developed by David Heinemeier Hansson. Developers can build applications with incredible speed compared to other frameworks like Java.

Rails include everything you need to create a database-driven application, using the MVC design pattern along with SQLite.

Additionally, because it’s built on Ruby, you have access to a vast gem library that can add further functionality to your application.

Django is the Python equivalent framework to Rails that follows the model-template-view architectural pattern. It encourages rapid development and clean, pragmatic design. For Python developers, it’s the most popular framework in use next to Flask.

Angular is a framework by Google that helps developers build large-scale and high-performance web applications. It’s also very opinionated when it comes to what design patterns it accepts, however, this isn’t a bad thing.

Being a Google-backed framework, one can expect a level of care that has been given to building the framework.