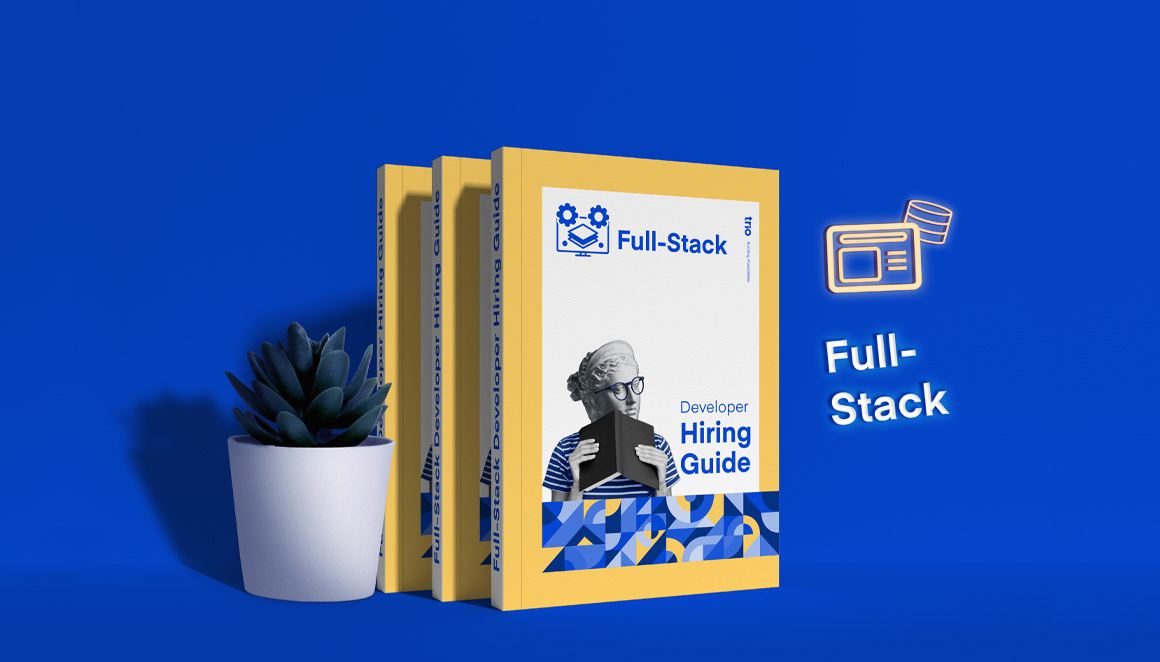 The title itself is very appealing, as it implies that the developer is competent with working on both the front-end and back-end of an application.

Depending on the size and complexity of the application, this can be a major time saver. In other cases, a full-stack developer can jeopardize timelines and quality if they aren’t experienced enough.

So what makes a full-stack developer particularly valuable to your development initiatives? What would they need to know in order to make your idea a reality?

Well, it depends on many factors and full-stack developers aren’t always in the position to be making architectural decisions. That’s a process for higher-level roles such as a software architect, VP, or even a CTO.

They also have picked up some insights on what clean code and architecture actually mean, and are able to apply high-level principles to their work.

Trio has invested time and resources into training software developers to think and work more like senior developers. Our clients enjoy a level of professionalism that many tech startups and SMBs miss out on.

How Effective Are Full Stack Developers?

Full-stack essentially combines front-end and back-end expertise into one job role however a developer often will be stronger in one area than the other. They will also enjoy one side of the process more than the other as well. As a manager, it’s your job to take a hard look at the product you wish to build and determine what’s more important, the front-end or the back-end.

If you are building a product that is highly visual and requires a UI that captivates your end-user, you will need a full-stack developer with considerable front-end knowledge. On the other hand, if your product is reliant on back-end technologies then you will need a developer who loves back-end.

In the case that you have enough resources to hire 2-3 developers and make a small team, you can use the following combinations based on your needs.

What Technologies Should Full-Stack Developers Be Proficient In?

Full-stack developers come in many different flavors, but perhaps the most common proficiency is JavaScript and technologies that use it. More on that later.

Many web applications can be summed up by their frameworks. There are a number of different application frameworks that all use different programming languages. Below are some popular ones:

Rails is a very popular framework developed by David Heinemeier Hansson. Developers can build applications with incredible speed compared to other frameworks like Java.

Rails include everything you need to create a database-driven application, using the MVC design pattern along with SQLite. Additionally, because it’s built on Ruby, you have access to a vast gem library that can add further functionality to your application.

Django is the Python equivalent framework to Rails that follows the model-template-view architectural pattern. It encourages rapid development and clean, pragmatic design. For Python developers, it’s the most popular framework in use next to Flask.

Angular is a framework by Google that helps developers build large-scale and high-performance web applications. It’s also very opinionated when it comes to what design patterns it accepts, however, this isn’t a bad thing. Being a Google-backed framework, one can expect a level of care that has been given to building the framework.

Powered by Microsoft, ASP.NET is a high performance and lightweight framework for building Web Applications using .NET. While it might not have the same level of appeal as JavaScript or Ruby framework, ASP.NET comes with a number of benefits as it extends the .NET Developer Platform and offers free hosting with Microsoft Azure.

It’s a great choice for applications that want real-time bi-directional communication between the client and the server, microservices that live in docker containers and the ability to build out REST APIs for a range of clients including browsers and mobile devices.

Laravel is one of the best PHP frameworks out and uses the MVC design pattern like many other frameworks. Developers are able to build PHP web applications with expressive and elegant syntax, making the process much more enjoyable.

Depending on the type of product you are trying to build, you will have to make high-level decisions as to what programming language and frameworks you will leverage. But one doesn’t have to commit to a framework. In fact, many companies put together a technology stack that best fits their needs.

Technology stacks become an advanced topic and will ultimately affect your hiring process. If you have a popular technology stack, it will be easier to find talent.

On the other hand, if your stack is specialized then you will have a harder time finding developers that are proficient in the combination of technologies that you use.

A good CTO will be able to consider these tradeoffs and make a sound decision based on the technologies you use, but that’s a topic fit for another article.

Let’s take a look at some popular technology stacks that are currently being used:

The MEAN stack is a collection of JavaScript technologies used for building web applications. It’s an acronym for MongoDB, ExpressJS, AngularJS, and Node.js.

The MERN stack is a collection of JavaScript technologies used for building web applications. It’s an acronym for MongoDB, ExpressJS, ReactJS, and Node.js.

The LAMP stack is a collection of open source technologies used for building web applications. It’s an acronym for Linux, Apache, MySQL, PHP/Perl/Python.

These are just a few of the more popular stacks that are out there. Full-Stack developers will generally have experience with one or two frameworks as well as a tech stack combination depending on their primary programming language.