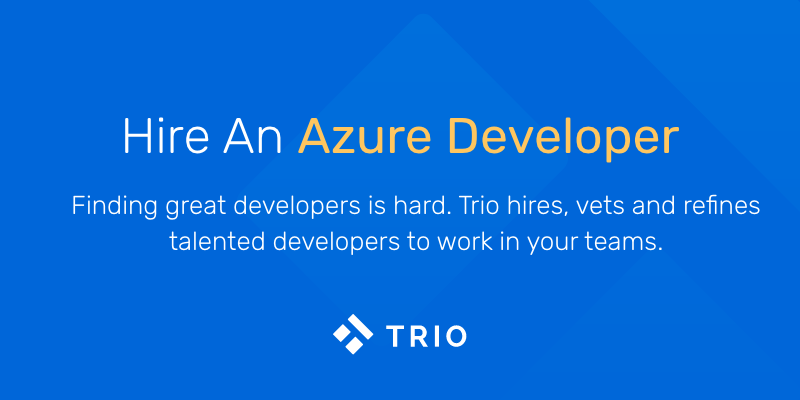 Through cloud computing, businesses can have servers, networks, storage, and entire software systems easily accessible given a computer and internet connection and minus all the wires and bulky machinery.

Many businesses have capitalized off cloud computing and given other businesses the chance to reap the benefits by way of a B2B relationship of mutual interest. Azure, an innovative cloud development credited to Microsoft, is one of these businesses.

Azure is a collection of cloud services offered by Microsoft. This collection is not steadfast and always open to expansion. Microsoft markets Azure towards businesses in an attempt to help them overcome common challenges.

With Azure, you can develop, manage, and deploy applications with tools designed to make your job easier. The solutions that Azure addresses are wide-ranging and include industries like:

In total, Microsoft Azure lists over 600 services. But generally, when cloud computing is involved, there are three distinct designations for any given cloud service – SaaS, PaaS, and IaaS. Of course, Microsoft Azure has the capacity to supply all three.

Software as a Service (SaaS)

Software as a service (SaaS) is a model of cloud computing that aims to give clients ease of access to professional products. Think of any software you can access online in turn for downloading and installing a large package on your computer and you probably have the right idea.

Some examples of SaaS would be Google Apps, Dropbox, or Netflix. All these applications are hosted via a remote server that can be accessed through the Internet.

Platform as a Service (PaaS)

Platform as a service (PaaS) is a category of cloud computing that provides a platform for clients to build applications.

Examples of PaaS might be less familiar if you’re not super hip on what’s going on in the developer world. But the biggest names in PaaS cloud computing include Salesforce, IBM Cloud, and Software AG.

Infrastructure as a Service

Infrastructure as a service (IaaS) is the most general of all the categories. Businesses that use IaaS trust cloud services to host important IT infrastructure, effectively virtualizing most or all processes of software development that would require a hardware component.

As a result, businesses cut the costs associated with maintenance and renting or owning infrastructure. Azure itself would be a salient illustration of IaaS.

Businesses choose to utilize Azure for an array of diverse purposes varying from storage to networking to simply building apps.

What Is an Azure Developer?

Naturally, as Azure is such a substantial service, the role of an Azure developer will change depending on what cloud service type your business opts to use.

And then, their role will narrow down further depending on what the specific project is – whether it is related to web or mobile devices, messaging, security, etc.

If you’re looking to develop an app, PaaS would be the path to go down. Typically, Azure developers who build apps have expertise in HTML5, JavaScript, and SQL Server.

Your reasons for using Azure can be quite practical. This is because Azure is such a resourceful service that there is a multitude of scenarios in which Azure would be applicable. Let’s look at some of Azure’s most relevant tools.

For businesses looking to build applications, Azure will be by your side every step of the way. Besides developing the apps in and of itself, Azure can help with testing and deployment to make sure releasing your app to the market is smooth sailing.

Storage is one of the most common ways in which software teams use cloud services. Accessing data through the cloud is often a simpler and more secure way to keep track of important records and information.

Azure allows you to create Microsoft and Linux virtual machines (VMs) in a matter of minutes. With a VM, you can have all the basic functionality of your preferred computer system and operating system in lieu of the hardware in front of you.

Visual Studio is an add-on Azure service that extends support to app developers for the entire application lifecycle management (ALM). Tracking code changes, performing load tests, and collaborating on a global scale are just some of the features of Visual Studio.

You already know what Azure can do for you, but why is it so important that you need a cloud service in the first place?

In the tech industry, it’s been rumored that on-premise infrastructure is a thing of the past. Cloud computing is not just a trend, it’s the future. And ideally, you want your business to be part of that future.

Like most cloud services, the benefit of services like Azure is having the ability to shave off unnecessary costs from the jump. There is an alternative to expensive, heavy, and space-filling infrastructure and there aren’t too many reasons not to use it.

An in-house data center is a major financial sacrifice especially for small to medium-sized businesses that are forced to rent out space. Azure can save your budget.

For the same reason, Azure is extremely flexible. Creating new apps and services for your businesses does not require additional hardware that needs provisioning for power and operating system setups, among other things.

Security could very well be the most compelling rationale for using Azure. While stopping hackers is one thing, no software professional is prepared to stop a natural disaster like an earthquake or hurricane.

When this happens and physical infrastructure is affected, you risk the loss of important data for your business and customers. The cloud has built-in redundancies and it’s an overall safer approach to running your business.

Companies That Use Azure

Reasons to Hire an Azure Developer

Using cloud services is nearly inevitable. It’s what everybody’s doing – but not just because it’s mainstream because it’s clever.

Take your business to the cloud if you want to move forward too. But you can’t do it alone. You need help.

Professional Azure developers can help you make the best out of the cloud and this will lead to significant business growth down the line.

Azure is admittedly a powerhouse when it comes to all things software in the cloud. Web development, data management, storage centers, and more – Azure is equipped to help your business succeed.

But with all these sectors, it’s up to you to step up and fully realize what the game plan is for your business. Don’t feel overwhelmed by the options. Narrow down and zero in.

Once you know exactly what project you want to start working on, take a look at the following tips for hiring an Azure developer.

How do you hire an Azure developer?

For those who wish to take the high road and hire Azure developers on your own, we’re still here to help.

What should you look for in an Azure developer?

Azure developers should be expected to have the following:

Due to economic differences between the United States and South America as a whole, the cost of offshoring software development is significantly lower than hiring full-time with U.S talent. For Senior Azure Developers in South America, the average salary is currently around $100,000 whereas a mid-level developer costs around $76,000.

Eastern Europe shares very similar rates to South America, again due to the economic differences. When looking at salaries in Eastern Europe, data shows that a Senior Azure Developer costs around $100,000 on average.

Why Hire an Azure Developer?

Trio Azure developers are pre-vetted, interviewed, and then trained further to become true software professionals, capable of adapting to situations that are both within and outside of the scope of their general expertise.

To find out more, tell us about your project and we’ll get you started.