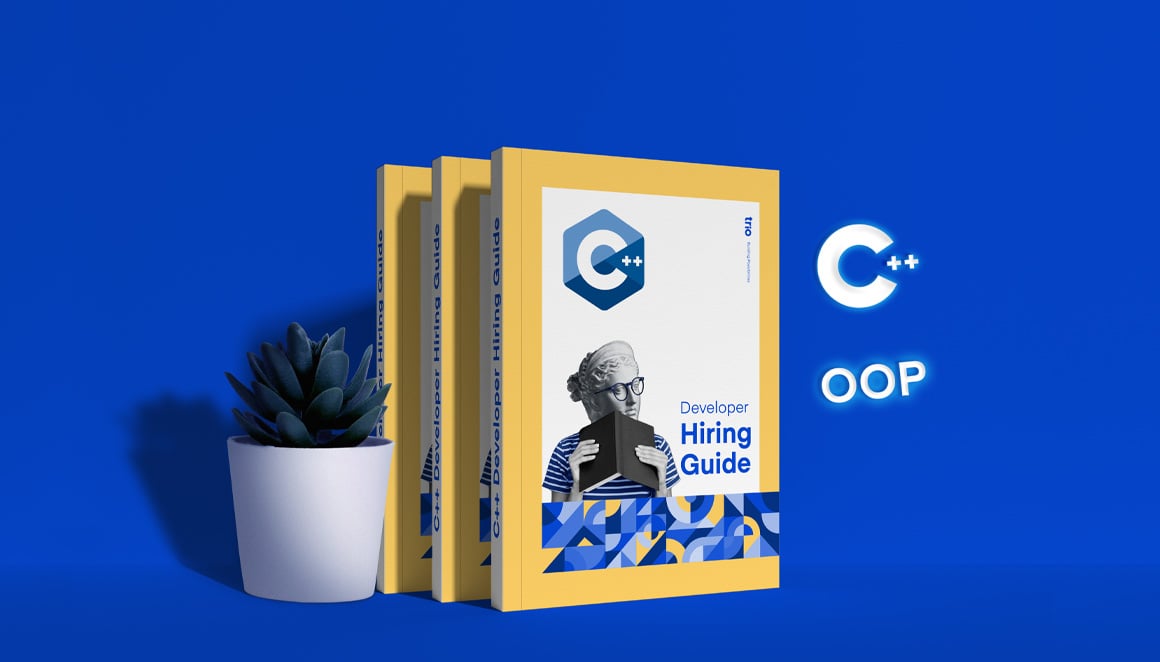 When your business wants to get close to the hardware of a machine, you need to make use of a middle-level language. While C is widely popular in the industry for that exact purpose, its successor supplies some quintessential upgrades.

Businesses favor C++ over other languages when they need to build large and lasting systems while squeezing out every last drop of performance. AAA title video games are a great example of this. Companies like Blizzard and others that build embedded technologies rely on C++ as their main technology.

C++ is a general-purpose, compiled language created by Bjarne Stroustrup at Bell Labs in 1985. General-purpose languages are used for writing software for a variety of application domains.

Save for a few minor differences, C++ is nearly a superset of C. For this reason, it is often dubbed “C with Classes”.

C++ is also object-oriented. Most developers consider object-oriented languages to be advantageous as it allows for a more abstract but intuitive development environment using classes.

Moreover, C++ is designed for large systems. In other words, the language has a positive bias towards systems programming and embedded software.

Systems programming involves interacting directly with the machine. Developers who program for systems may build a word processor which you can open from your desktop, for example, rather than a website or mobile app.

Embedded software is written to control machines and devices. As an illustration, the software written for robotics operations is embedded.

What Is a C++ Developer?

C++ developers are software engineers who are able to build a diverse set of application types using the C++ language. Naturally, they are capable of maintaining the software they build in addition to any program that utilizes C++.

That said, C++ is optimized for systems programming which aligns most closely with desktop applications. It is ideal for embedded software as well such as digital watches or pacemakers, for instance.

Because of this, C++ developers must have some understanding of how computer hardware works alongside software.

C++ developers may do more than simply code. They can conceptualize and organize app ideas. Such a process can include building complex algorithms.

Developers who use C++ also have competency with object-oriented programming.

C++ has an extensive range of uses. Being low-level, C++ has the capacity to work alongside computer hardware so developers can make sizable software systems.

For instance, C++ is the language behind both Google Chrome and Mozilla Firefox. Using some of the available libraries of C++ such as a web layout engine, UI toolkit, and JavaScript engine, even intermediate developers can create a simple web browser.

Games are in the same boat. C++ helps optimize the use of resources in order to reduce overload on the machine. It simplifies the complexity of 3D games and developers are able to use the network for multiplayer modes.

In that same vein, modeling, simulation, rendering, and 3D animation are all part of the C++ toolset, making animation development a breeze.

Popular companies like Adobe depend on the graphic tools of C++ for applications like Illustrator and Adobe Photoshop. Adobe developers are active in the C++ community.

Operating systems themselves are built with C++ which should come as no surprise considering the history of the language.

Media players and the management of video and audio files heavily rely on C++ as well. Not to mention, developers use C++ for PDF technology.

Even compilers, an essential component to computer programming in and of itself, are mainly written in C++.

What’s more, C++ is the preferred language for building medical and engineering applications like MRI scans and computer-aided design systems.

For your business, using C++ will offer many advantages. C++ is a very intentionally built programming language, and developers flock to it for that reason.

C++ is highly portable in the sense that it can be used on a variety of systems. This is especially appealing when it comes to mobile apps. For some developers, the long-fought war between native apps and cross-platform apps can be easily resolved with C++ which permits multi-platform development.

The object-oriented features of C++ include features like inheritance, polymorphism, encapsulation, and abstraction.

With general-purpose languages – C++ being one of the fastest of them – developers can make games, graphics, and even calculators, amongst other things.

C++ has a rich library of built-in functions. These functions are deployed to manipulate files, methods, and data structures.

Companies That Use C++

Reasons to Hire a C++ Developer

Since C++ is a multi-purpose language C++ developers are multi-purpose as well. Whether you plan on building a mobile app or web application, or something entirely different, C++ will be helpful.

C++ is also a very popular language at the moment, meaning that if you wanted to hire a C++ developer you’d be able to choose from a large applicant pool.

Another reason to hire a C++ developer is if you want to develop applications where hardware plays a large role.

Professional C++ developers can be an invaluable asset for your business. C++ is known for its security, its features, and speed.

Developers like C++ because of its adaptability for any platform or application. This makes C++ even more likable for you and your business.

Whatever you decide to develop, C++ developers can be of assistance.

How do you hire a C++ developer?

For those who wish to take the high road and hire WordPress developers on your own, we’re still here to help. Hiring a developer on your own is a very focused and hands-on process that requires considerable knowledge about software development in general.

What should you look for in a C++ developer?

At a high level, C++ should have the following skills and qualities:

Due to economic differences between the United States and South America as a whole, the cost of offshoring software development is significantly lower than hiring full-time with U.S talent. For C++ developers in South America, the average salary is currently around $100,000 whereas a mid-level developer costs around $76,000.

Eastern Europe shares very similar rates to South America, again due to the economic differences. When looking at salaries in Eastern Europe, data shows that a Senior C++ developer costs around $100,000 on average.

Why Hire a C++ Developer?

Trio C++ developers are pre-vetted, interviewed, and then trained further to become true software professionals, capable of adapting to situations that are both within and outside of the scope of their general expertise.

To learn more, get in touch with Trio today and tell us about your project.

What do C++ developers do?

C++ developers have been in high demand virtually since the language was created. This is because C++ is used in several industries and for a multitude of purposes.

How do I hire a good C++ developer?

It’s important to ask technical questions during the interview related to what type of app development you’re thinking of for your business. But you can also use resources like Trio to make sure you have qualified C++ developers.