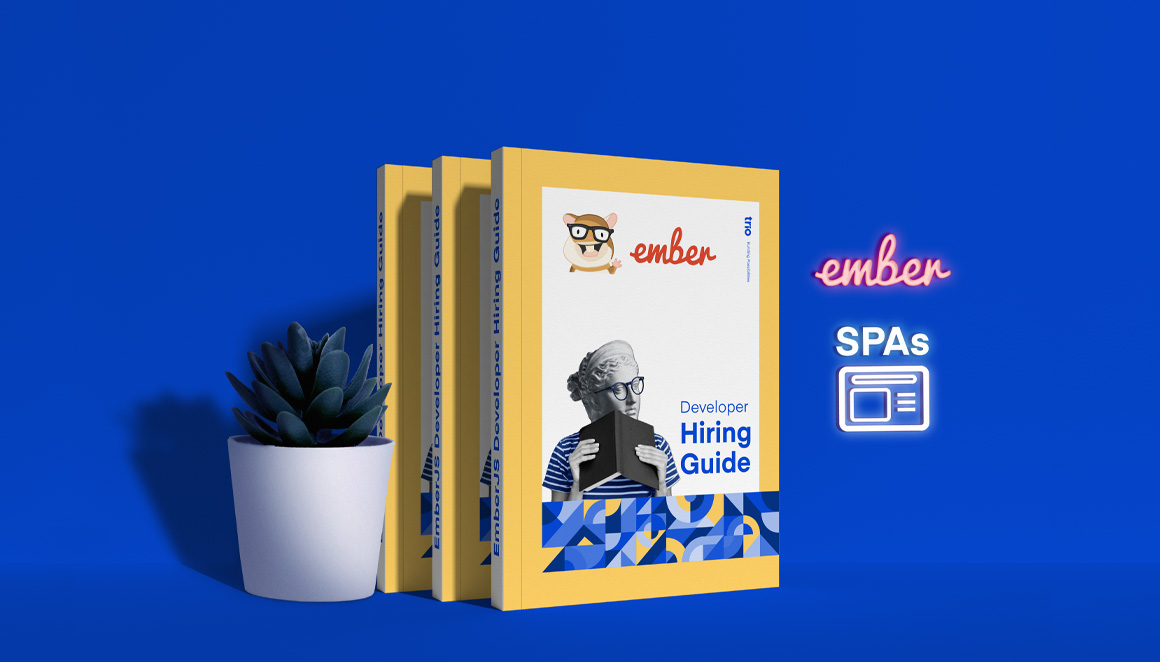 Often businesses aim to build a website simply to better promote their brand. But if your next project involves developing a web app that will be the crux of your business plan, then your desires are a bit more ambitious.

That said, for those who are ambitious, there is one framework that claims to meet the demands of a user-intensive web application: Ember.js.

Ember.js is an open-source JavaScript web framework. In order to run efficient single-page applications (SPAs), Ember.js operates in the browser where it can respond to user interaction without refreshing the page.

This is in turn for alternative JavaScript frameworks that revolve around the view in the model-view-controller (MVC) software architecture with the intention that developers build from there. While Ember.js was originally released with the MVC pattern, components have since become central to its makeup.

MVC is the typical design pattern for user interfaces where the model, view, and controller are three interconnected elements. This design separates the business logic from the presentation layer.

The user first interacts with the view or user interface. This interaction prompts the view to notify the controller of the event. The controller then updates the model which quite literally models the user’s subsequent view.

More specifically, after the controller updates the model, the model alerts the view that it has changed. Then the view must grab the data from the model and present the user with a new view.

In Ember.js, components effectively replace the view and most controllers. Some describe Ember.js as utilizing a component-service pattern for this reason. Components allow markup text and styles to be reusable.

Three major services of Ember.js are routes, models, and controllers. The route tells the template which model it should display combining the responsibilities of the view and controller.

What Is an Ember.js Developer?

These languages enable developers to build user interfaces (UIs) with dynamic and interactive content. Ember.js is a framework based in JavaScript to aid developers in this mission.

Although Ember.js is generally used as a framework for web development, it is possible to build desktop and mobile applications using Ember.js as well. This means that Ember.js developers can be mobile app developers or computer programmers.

Single-page applications are designed to look and feel like native mobile apps. In this case, many Ember.js web developers share attributes with mobile app developers.

Ember.js is a framework for building single-page applications (SPAs). The defining difference between SPAs and standard applications is that SPAs rely on a one-page interface.

Most of the business logic is written on the client-side using JavaScript and executed in the browser. Any CSS, JavaScript, or HTML is loaded only once at startup or dynamically retrieved when necessary.

The benefit of this is little to no page loading waits. Some popular examples of Ember.js apps that have achieved such an effect are Twitch, Vine, and Apple Music.

Apart from the basics, developers likely choose Ember.js for what some might call a no-frills approach. This takes form via two strong programming principles – Conventions over Configuration (CoC) and Don’t Repeat Yourself (DRY).

CoC is a design paradigm that purports to ease development by alleviating the decision-making process for developers. Instead of leaving the developer to write configuration files, frameworks that use the CoC paradigm auto-configure applications for developers using common conventions. Developers can customize configurations thereafter as needed.

Ember.js takes use of CoC ultimately reducing time spent in development for developers. This explains the many out-of-the-box features that can be obtained via the Ember.js CLI generator.

DRY is another useful coding principle with the objective of mitigating redundancy. Components are one of the ways in which Ember.js accomplishes this.

Ember.js doesn’t call itself ambitious for no reason. The framework empowers the developers to program web applications in a unique but ultimately more convenient way. Here are some advantages of Ember.js.

Stability without stagnation is one of the integral mantras of Ember.js. Essentially this means that while Ember.js developers favor continuous development over time Ember.js is always made to be backward-compatible with every new iteration of its release.

On that same note, Ember.js releases a new, stable edition every six weeks. Though perhaps excessive, this level of dedication gets the point across. Ember.js is constantly improving and committed to serving its consumer base.

With over 800 contributors to its name on GitHub, Ember.js is well-maintained and supported by a wholly invested community. Developers can also use the discussion forum for Ember.js and its Discord page to ask and answer questions.

For networking, developers will find various meetings and conferences in nearly 70 countries. EmberFest in Europe and EmberConf in the United States stands out among the crowd.

A mere ‘ember-new’ plugged into the Ember.js command line will give you an entire application to work with. Plus, Ember CLI gives developers access to an ever-increasing number of powerful add-ons.

Broccoli.js is a particularly memorable addon specializing in file-based transformations. This includes the likes of concatenating, transpiling, and minifying, and much much more.

Ember.js is opinionated. For frameworks, this means that Ember.js has strict guidelines pertaining to how things should get done. DRY and CoC are two examples of this as well as Ember CLI. The result is easier and faster development.

Web Apps That Use Ember.js

Reasons to Hire an Ember.js Developer

Many have called Ember.js complicated. This is mostly because it strays from the traditional MVC pattern. But this might be a fair trade considering everything else Ember.js has to offer.

A single line of code in Ember CLI gets you a well-rounded application that needs only a bit of internal work. Luckily, several thousand addons will be more than helpful for that task.

Not to mention, Ember Observer can rank your dependencies so you can get a fresh glimpse of what’s been well-maintained and what’s better known as dead.

Ember.js also has coding best practices built into its core so you can do less worrying and more developing.

To be frank, Ember.js is not as popular as other JavaScript frameworks for web development such as AngularJS or React. This means that it will be harder to find experienced developers.

That said, it might be worth it. Isn’t that what ambitious means after all? The apps in this framework’s repertoire aren’t exactly outdated or indie. Imagine how your business would fare after creating the next Apple Music.

If you feel like finding qualified Ember.js developers will be too much of a burden you’ve come to the right place. But if you want to stray away from outsourcing there are still some tips here that could help you.

How do you hire an Ember.js developer?

For those who wish to take the high road and hire Ember.js developers on your own, we’re here to help.

What should you look for in an Ember.js developer?

At a high-level Ember.js developers should demonstrate the following skills:

Due to economic differences between the United States and South America as a whole, the cost of offshoring software development is significantly lower than hiring full-time with U.S talent. For Senior Ember.js Developers in South America, the average salary is currently around $100,000 whereas a mid-level developer costs around $76,000.

Eastern Europe shares very similar rates to South America, again due to the economic differences. When looking at salaries in Eastern Europe, data shows that a Senior Ember.js Developer costs around $100,000 on average.

Why Hire an Ember.js Developer?

Trio Ember.js developers are pre-vetted, interviewed, and then trained further to become true software professionals, capable of adapting to situations that are both within and outside of the scope of their general expertise.