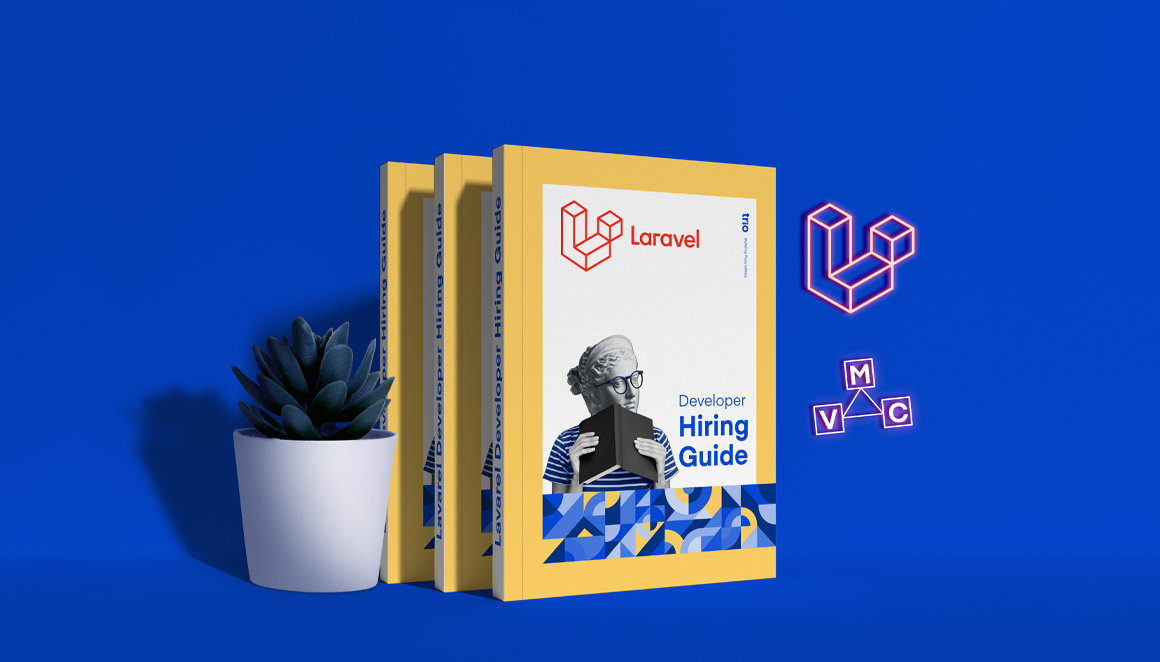 This allows for more control and structure, which can be very desirable traits for any business. A couple of frameworks exist to support those objectives. Lavarel is one of them.

Lavarel is a free, open-source PHP framework for web development. It follows the model-view-controller architectural pattern.

Lavarel was built using Symfony components. Symfony is another framework based on the MVC pattern.

For simplification purposes, you can think of the model-view-controller pattern as the process that happens when you order the meal.

The controller is the chef who accepts your request and prepares it. Their kitchen tools are the model. And the view is the finished product that is delivered to your door.

Developers appreciate MVC because of this simple deconstruction. Their appreciation, of course, is demonstrated through clear and maintainable code.

Laravel also relies on object-oriented programming principles. This and MVC together with the rest of Laravel’s tools helps developers create applications of varying scales and complexities.

CodeIgniter is one of Laravel’s influences. The creator of Laravel, Taylor Otwell, wanted to provide an alternative to the CodeIgniter framework because CodeIgniter neglected features such as built-in support for user authentication and authorization.

With cybersecurity being trending topic in the tech community, centralizing these features is imperative for any business, and thus dually important for frameworks to implement.

Since this initial development, Laravel has had more and more updates and newer versions every season. But they have made sure to add worthy features every time.

What Is a Laravel Developer?

A Laravel developer fits into several categories and/or descriptions. These include web developer, PHP developer, and back-end developer.

On its official website, Laravel claims to be the framework for web artisans. Indeed, its elegant syntax and the Laravel source code hosted on GitHub for ‘artisan’ tweaking supports that claim.

The syntax itself can be described as syntactic sugar, a term deployed for programming languages that are made to be ‘sweeter’, or easier for human use.

In GitHub, professional developers have the capacity to edit the Laravel source code for every whim and need.

The philosophy of Laravel is one that encourages the process of development to be sincerely enjoyable because “happy developers make the best code”.

All developers as well as those who hire developers should heed this note strongly in choosing any framework. And it is a compelling reason to consider Laravel as your preferred framework for web development.

The development team responsible for Laravel has attempted to combine the best features of every other prized framework within Laravel itself. Ruby on Rails, ASP.NET MVC, and Sinatra are some of Laravel’s inspirations.

One example of how Laravel offers ease of use is its templates. These are lightweight user interface (UI) designs that developers can customize to their liking.

On a more technical note, the Laravel framework has a number of object-oriented libraries, a material advantage compared to other PHP frameworks that are lacking in this regard.

As mentioned, the authentication library is one of the most cherished. Whichever way, Laravel aims to make things easy, if not at least simple.

Laravel is packed to the brim with helpful features to come to the aid of the average developer. For an expert developer and a startup business, these features are even more useful.

Laravel comes equipped with a modular packaging system with dependency management. Using this, developers can add functionality to their Laravel app without having the bother of coding it from scratch.

Besides ready-to-use packages, developers can use Laravel’s dependency management tool, Composer, to create their own packages.

Authentication systems serve as a protective measure for software. They make sure that the right person is accessing the right information.

Developers can write queries to manipulate data using object-relational mapping (ORM) via object-orienting programming. ORM is a necessary mechanism when there is a mismatch between the object model and the relational database.

Artisan, Laravel’s pre-approved command-line interface (CLI), shares the mission of the Laravel framework. In doing that, Artisan supplies dozens of pre-configured commands for the web artisans Laravel seeks to reach.

Laravel Homestead is the official development environment for the Laravel framework. In Homestead, developers can find all the tools they need to start developing right away.

Companies That Use Laravel

Reasons to Hire a Laravel Developer

When it comes to the World Wide Web, everybody is eager to witness their online creation come to life. But websites are also symbols for a business’s brand, professionalism, and aesthetic.

A bad website is nearly equivalent to a lost customer. If you want a good website, you have to put in the effort.

Naturally, there’s more than one way to put in the effort. But from an industry standpoint, researching and choosing a tech stack is entirely a matter of what suits your business best.

Most developers have a reasonable fondness of the MVC architecture. And you’ve heard that a happy developer writes the best code.

In the same vein, Laravel supports the MVC pattern to no end. Not to mention, Laravel is invested in the use of PHP and object-oriented programming as functional assets to get the most out of the framework.

While you can technically use Laravel without PHP, you won’t be able to get the most out of its features. Don’t sacrifice customizability and uniqueness. Hire Laravel developers.

Laravel will give you the tools you need to develop a website for your business. But only expert Laravel developers have the skills to use those tools appropriately.

Productive web development results in a vessel between you and your clientele to both communicate and promote when it comes to matters of product and business. Millions of websites currently occupy the web towards the same goal.

For those who want the function without unnecessary complexity, Laravel is a great start. But you can’t reach the finish line without Laravel developers as well.

How do you hire a Laravel developer?

For those who wish to take the high road and hire Laravel developers on your own, we’re still here to help. Hiring a developer on your own is a very focused and hands-on process that requires considerable knowledge about software development in general.

What should you look for in a Laravel developer?

At a high-level Laravel developers should be able to:

Due to economic differences between the United States and South America as a whole, the cost of offshoring software development is significantly lower than hiring full-time with U.S talent. For Laravel developers in South America, the average salary is currently around $100,000 whereas a mid-level developer costs around $76,000.

Eastern Europe shares very similar rates to South America, again due to the economic differences. When looking at salaries in Eastern Europe, data shows that a Senior Laravel Developer costs around $100,000 on average.

Why Hire a Laravel Developer?

Trio Laravel developers are pre-vetted, interviewed, and then trained further to become true software professionals, capable of adapting to situations that are both within and outside of the scope of their general expertise.