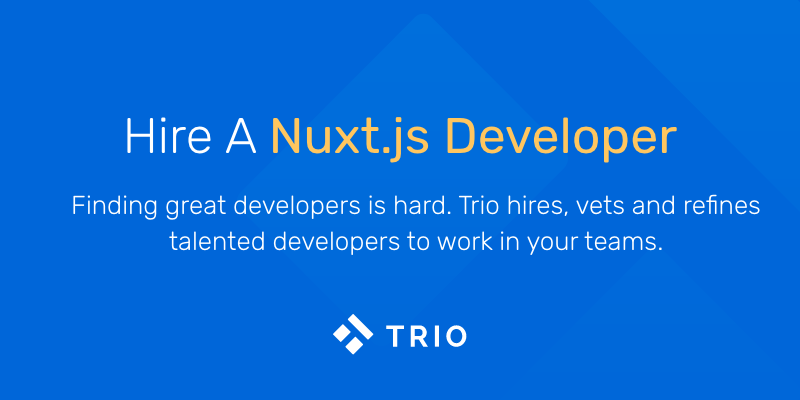 Nuxt.js is where software developers and marketers converge. They both want the same thing and that is effectively reducing the time between a user accessing an application and the content being rendered for display.

It’s easy to understand why software developers would want this. Performance and efficiency are almost inherent to the idea of coding in general, and speed is critical to that formulation.

The reason marketers – and specifically SEO experts – want this is a bit more complex. And single-page applications (SPAs) are partially to blame.

SPAs are web applications or websites that work within the webserver and don’t require reloads. Facebook and Google Maps are prime examples of SPAs where updates and notifications are sent to the user instantly.

The user especially is partial to the swiftness of such apps. Popular JavaScript frameworks like Vue.js specialize in SPAs. And in truth, any web application or website that experiences slow rendering faces the same issue.

The disadvantage, however, is that while users wait for content to load the first and only time, search engines are unable to draw the most relevant material from these apps. This makes advertising more difficult for web app developers and the businesses behind them.

Nuxt.js presents a solution to the problem by offering universal meta-framework. Let’s learn more about what Nuxt.js has to offer.

Server-side rendering (SSR) is the process that leads to this result. Also called isomorphic mode, with Nuxt.js developers can use a Node.js server to deliver HTML based components to the client without relying on pure JavaScript – which must be rendered on the client-side.

As a result, web pages will load faster and more completely, giving search engines the data it needs to put your web application or website at the top of user searches, given that you have the right content of course.

Typically, the implementation of SSR can be very difficult. But Nuxt.js takes care of all the complex configuration. That way, developers can just focus on writing code.

Another feature of Nuxt.js that makes it a valuable framework is static site generation. You can use static generation to make static websites that have fixed content.

Ironically, JavaScript was first praised because of its capacity to make dynamic websites, something that was once impossible. However, the benefit of static websites nowadays is easier rendering and therefore better SEO optimization.

The original authors of Nuxt.js were Alexandre Chopin, Sebastien Chopin, and Pooya Parsa. It was released in October of 2016.

What Is a Nuxt.js Developer?

A Nuxt.js developer is a web developer who uses Nuxt.js alongside Vue.js to develop web applications. Vue.js is a framework for building user interfaces (UI) and Nuxt.js was built on top of Vue.js to offer SSR.

Nuxt.js developers are familiar with classic web technologies like JavaScript, CSS, and HTML but work within the Nuxt.js and Vue.js frameworks. Both frameworks focus on UIs and client-side material thus a Nuxt.js developer is a front-end developer as well.

Nuxt.js has a lot to offer. Many of its best features have already been discussed. But let’s review how exactly these features can help your business thrive.

Server-side rendering is probably the feature most relevant to your business growth. To reiterate, SSR search engines can better crawl the web for your content. This is because your data has already been rendered before reaching the client.

Pre-rendering is basically synonymous with static site generation. While SSR is one way to streamline rendering for your web application, pre-rendering does not require any input from the server whatsoever.

In static site generation, HTML files are generated as you build your project, so long as their static, and it does not need to be served to a client through a server. These files are not encapsulated as Vue.js projects but rather simply as .html files.

The con of static sites is less interactive content. The pro is search engines know exactly what it needs to in order to promote your content.

Code splitting helps developers compartmentalizes different web pages. In Nuxt.js, this happens by default. Components are contained within the code. At runtime, these bundles can be dynamically loaded.

Once you’ve decided that Nuxt.js is the way to go you’ll be happy to hear developing with Nuxt.js comes with some perks. Even the most skilled developers want to work with software that makes their job less strenuous. And Nuxt.js has taken on the challenge.

Setting up a Nuxt.js project can be done in a matter of minutes. Nuxt.js handles all the routines and configuration so developers only need to worry about coding. And the faster they code, the faster your app can hit the market.

Developers can control the code structure through several files, even in a small project. Assets, components, layouts, and what have you all have their own folders making organization a simple task. You can credit webpack for this modular framing.

JavaScript animations, CSS animations, and CSS transitions are constituents of a typical web application. The whole point of building dynamic web pages is to make things move and look pretty.

Fortunately, Nuxt.js has a transition element that makes it easy to create transitions between pages. Vue.js itself has a wrapper that handles animations and transitions in general.

Nuxt.js has a GitHub compiling the most helpful modules and starter kits for you to create your app. Beginner developers and veteran software engineers can both benefit from this.

Websites That Use Nuxt.js

Reasons to Hire a Nuxt.js Developer

If you’re planning to make an app, you’re responsible for figuring out how your app will support your business model, if at all. Another topic to consider is SEO (Search Engine Optimization).

SEO is of the utmost importance to a business. This is because users trust search engines to give them the results they want. And this trust can lead directly back to your website. But this is only when your website is at the top of search engine results.

Single-page applications are making a lot of headway on the web. They’re easy to build, performant, and responsive. But there are disadvantages. Nuxt.js can address the problem, but you need a Nuxt.js developer to do so.

If you’re already using Vue.js, Nuxt.js should be your next step to improve SEO for your business. SPAs are a useful way to get your business off the ground especially if you don’t have the budgets or resources for a standard mobile app.

That said, SPAs might be more trouble than they are worth if your SEO isn’t on point. In this case, hiring a Nuxt.js developer is the right decision.

How do you hire a Nuxt.js developer?

For those who wish to take the high road and hire Nuxt.js developers on your own, we’re still here to help. Hiring a developer on your own is a very focused and hands-on process that requires considerable knowledge about software development in general.

What should you look for in a Nuxt.js developer?

Nuxt.js depends on Vue.js meaning many qualifications are comparable. For example, in addition to being familiar with the Nuxt.js framework, Nuxt.js developers should share the following skills related to Vue.js development:

Due to economic differences between the United States and South America as a whole, the cost of offshoring software development is significantly lower than hiring full-time with U.S talent. For Vue.js developers in South America, the average salary is currently around $100,000 whereas a mid-level developer costs around $76,000.

Eastern Europe shares very similar rates to South America, again due to the economic differences. When looking at salaries in Eastern Europe, data shows that a Senior Vue.js Developer costs around $100,000 on average.

Why Hire a Nuxt.js Developer?

Trio Nuxt.js developers are pre-vetted, interviewed, and then trained further to become true software professionals, capable of adapting to situations that are both within and outside of the scope of their general expertise.

Want in? Tell us about your project and we can get you started.