What is Vue.js? Dubbed the ‘progressive’ framework, Vue.js is most notable for its particular design philosophy, which centers incremental adoption in regards to the software development process.

Despite its nickname, Vue.js is not exactly filled to the brim with feature after feature. In fact, Vue.js offers the bare minimum of what you’d expect from a JavaScript framework.

In a world full of complexities and technological advancements beyond your imagination, sometimes being basic is a good thing. Vue.js is a framework just for that purpose.

Vue.js applications can start small and build bigger and better whereas another framework would make complexity the default. To find out more about Vue.js and how it works, stay tuned.

Vue.js is a JavaScript framework for building user interfaces (UIs) and single-page applications (SPAs). Just like the best of them, Vue.js is open-source. It utilizes a model-view-viewmodel (MVVM) architectural pattern.

Designed by Evan You and released in 2014, the framework is a direct response to You’s time spent working with AngularJS at Google. You wanted to extract the bits and pieces he liked from AngularJS and create an entirely new but notably lightweight framework.

The MVVM architecture allows for the business logic, or model, to be distinguished from the graphical UI, or view.

In effect, the distinction provides an intentionally intuitive pattern for front-end and back-end developers to work with. The viewmodel is the structure keeping such concerns separate, acting as a liaison.

Further, Vue.js has a core library that focuses only on the view layer. Any additional functionality must be garnered using the supporting libraries of Vue.js. But this tooling is not built-in, hence the adjective ‘progressive’.

But Vue.js’s most outstanding feature is its directives. Directives are HTML attributes that permit developers to extend HTML, a foundational technology of web pages that determines the structure of web page content.

What is Vue.js? Vue.js is more than just the sum of its parts.

Although it is lightweight and intuitive with the added boon of extensive HTML functionality, there are even more advantages that describe what Vue.js is and how it can be used effectively in your tech stack. 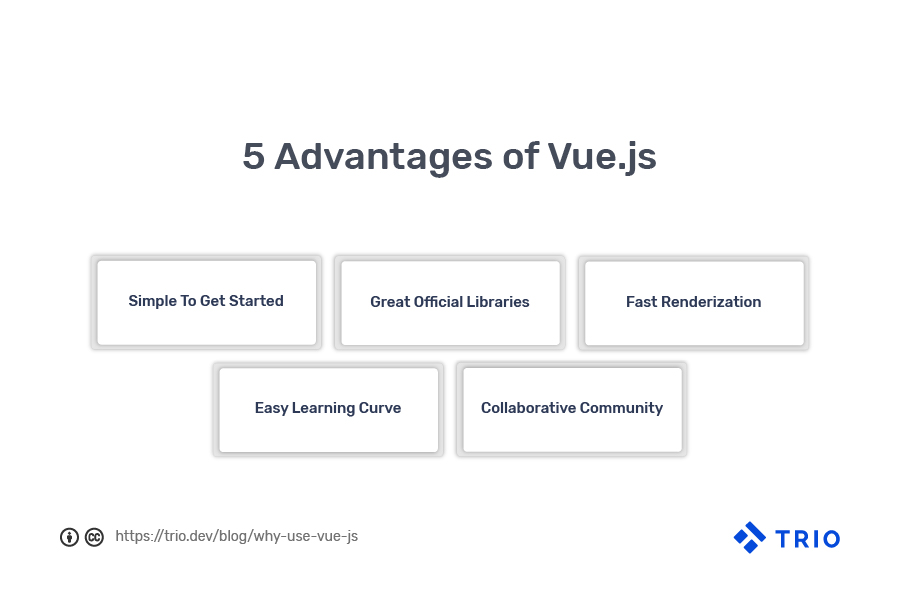 1. Simple To Get Started

Besides progressive, Vue.js is also called ‘incrementally adoptable’. This means that Vue.js and the applications that use it are designed from the ground up. The advantage here is that it’s easy to get started. And you can get complex whenever you feel the need.

The core library of Vue.js is also based on CSS, HTML, and JavaScript — the quintessential ingredients for any great web development project.

The features that you’ll soon enough want for additional functionality in Vue.js are covered by the framework’s official libraries. After setting up the basics, it’s likely routing and state management will be your biggest concerns.

Routing is the mechanism that guides HTTP requests to the code that handles them. State management is the manipulation of UI controls like text fields and OK buttons from one state to another.

Vue Router and Vuex are the respective Vue.js libraries for routing and state management.

The lightweight nature of Vue.js — its package size being only 21 KBs — makes it faster than its competitors. Its virtual DOM, in particular, speeds up rendering.

For reference, a document object model (DOM) is an application programming interface (API) for HTML and XML, modeling how text is structured. A virtual DOM is a representation of the real thing enabling changes to be synced.

Synchronizing the virtual DOM is much more efficient than updating the actual DOM, which slows down performance.

Learning Vue.js doesn’t require a lot of background when it comes to libraries and JavaScript variations. Nope. The classic CSS, HTML, and JavaScript do just fine here.

Rely on popular code editors like Visual Studio and Atom if you want to make coding in Vue.js even easier than it already is.

Like most open-source languages and frameworks, Vue.js has a supportive and dedicated community.

Along with a Discord chat and forum, there are over 72,000 questions tagged ‘vue.js’ on Stack Overflow. There are more than 132,000 Github members using Vue.js.

What Are the Cons of Vue.js?

For all its advantages, there are reasons not to use Vue.js. This is to be expected, but it’s still important to take stock of the good as well as the bad when choosing new technologies for your business.

Strangely enough, the most common complaint about Vue.js is that it is too flexible, or at least more flexible than is needed.

Because Vue.js gives the developers the opportunity to really start from scratch, the immediate gain is more flexibility for the implementation of new features.

The downfall, on the other hand, is things can get more complicated as errors and irregularities start to evolve with larger projects.

Even though the ecosystem for Vue.js is decently expansive, including its official libraries and communities, compare Vue.js to React, for example or AngularJS, and you’ll notice some stark differences.

The difference that is most concerning is that Vue.js simply does not have as many plug-ins or components as other frameworks of its kind. Without a doubt, this is a major drawback for Vue.js.

For many reasons, Vue.js’s modernity is not as advantageous as it may seem. The community, for one, is still small.

Vue.js was also developed by Chinese authors therefore many of its related projects are difficult to understand for English speakers. And it’ll be some time before enough kind-hearted souls are willing to contribute to a full translation.

What Is Vue.js Used For?

JavaScript in general is best used for web development. But Vue.js is aptly applied for many purposes. Below are some Vue.js examples showing  exactly how the framework can be used.

A prototype in web development is a mockup of your web design that can demonstrate how the website will work before you actually build and launch it.

Vue.js was designed for prototyping. In fact, Evan You’s initial inspiration came from working on prototypes within a browser at Google. Frustrated with AngularJS, he created a suitable alternative.

As Vue.js can be utilized with only the standard HTML, CSS, and JavaScript, building a stock UI project in Vue.js is quite a breeze. Other features of Vue.js like its small learning curve and fast rendering are a big help too.

Vue.js can even be a great asset for adding functionality to existing applications. It is small and relies on JavaScript so it should be fairly easy to integrate it with any pre-existing JavaScript project.

Not to mention, Vue.js is compatible with many back-end technologies like PHP’s Laravel, Express.js, Python’s Django, and Ruby on Rails.

There is no native support for Vue.js mobile app development. But there are several projects that will facilitate its use regardless.

Capacitor is a project credited to Ionic, a software development kit (SDK) for cross-platform mobile development. Use this with Vue.js to create native iOS and Android applications or progressive web apps (PWAs).

Or you can opt to use NativeScript which powers cross-platform native apps. You can use this with Vue.js and depend on the JavaScript language throughout your entire development project.

The easiest way to explain single-page applications is to envision them as web pages that don’t need refreshing. Hence, they look a lot like mobile applications.

The background of this phenomenon involves dynamically rewriting the standing web page with new data from the web server rather than reloading entirely new pages.

In some ways, this is the best usage for Vue.js. SPAs keep things simple, as does Vue.js.

What Companies Are Using Vue.js?

According to StackShare, a rising online resource that shares the software tools of several thousand companies, Vue.js is a reliable feature in the tech stacks of numerous major companies.

Of the over 3000 companies that are listed as part of this data for Vue.js, here are some of the more popular companies using Vue.js:

Trustpilot is a bit like Yelp but more diverse in execution. You might go to Yelp to see the rating of a local restaurant but Trustpilot will tell you whether a business is even authentic in the first place.

To be clear, Trustpilot is fairly investigative. Though the platform comes with a price tag, the company takes great effort to ensure that user reviews — whether they come from a retail store or a car dealership — are sincere and similarly, businesses must meet that same standard.

Note that Trustpilot also has a global reach. And in spite of its popularity, Trustpilot still uses Vue.js for the UI of its users’ pages, demonstrating how scalable Vue.js can really be.

Trivago is a travel site for trip planning. Through the platform, users can book hotels via an interactive and responsive UI.

Though Trivago mainly uses React, the developer team at Trivago has confirmed that they use Vue.js too!

You may have never heard of Accenture but it’s doing quite well just the same. Accenture is a multinational Fortune 500 company offering consulting services in the business and technology realm.

The company seems to use a large pool of front-end technologies — AngularJS, React, and naturally, Accenture is one of the major companies using Vue.js.

Statista makes it easy for the common Internet dweller to find consumer and market data without browsing a dozen different research articles that never seem to have the answer you’re looking for.

In effect, Statista can be a utilitarian asset for the curious or for researchers at the professional level. The website is basically a vast online database, and you can access the front-end of all this data thanks to Statista’s use of Vue.js. 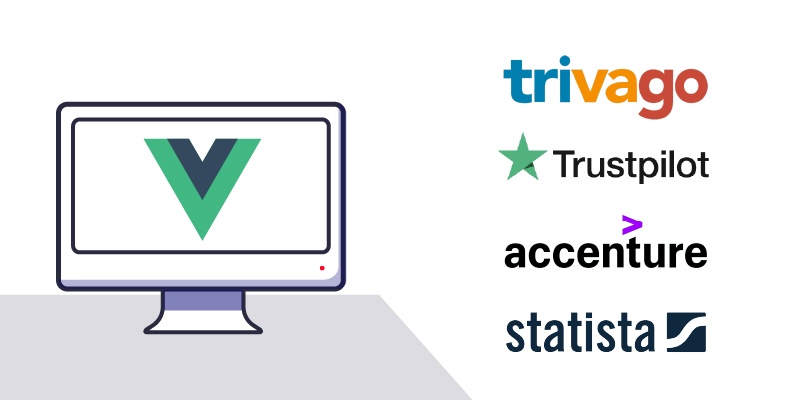 How To Hire the Right Vue.js Developer?

Hiring the right Vue.js developer may be more complicated than meets the eye. Although you’ve learned something about what Vue.js can offer in the past ten minutes or so, this doesn’t necessarily make you an expert.

And while you don’t need to be an expert to hire software developers, you do need to know what your expectations are. When technology is involved, this can get a little complex.

You have a few options. Dive face-first into research. You definitely have the resources to take thisroute. Trio has a blog at your disposal with dozens of articles that will be of service in helping you find the right developer.

Others choose to outsource developers. Trio knows quite a bit about that too. Outsourcing developers allows you to work with global talent, often at a cheaper price than hiring a developer in the United States.

Now that you know your options, choose wisely. Don’t be afraid to reach out for help.

What is Vue.js? In layperson terms, Vue.js is a tiny framework with a powerful punch. For those who find it easier to work from a blank slate, Vue.js provides that convenience.

The other perks of the framework are its speed, simplicity, and support from both its libraries and its community.

Trio has several software engineers with the technical expertise to build your project successfully, be it simple or complex.

Talk with Trio about hiring Vue.js developers and learn how we can help you use Vue.js to enhance your project.

What are the advantages of Vue.js?

The advantages of Vue.js include its simplicity, library support, speed, small learning curve, and collaborative community.

What are the cons of Vue.js?

Cons of Vue.js is that it is too new, too limited, and too flexible.

What is a singe-page applications (SPA)?

The easiest way to explain single-page applications is to envision them as web pages that don’t need refreshing. Hence, they look a lot like mobile applications.