Xamarin vs. React Native: Which Software To Choose in 2022?

With the value of the mobile app market breaking $189 billion in 2020, a decision like Xamarin vs. React Native can have a notable impact on businesses engaging in mobile app development.

Both Xamarin and React Native allow developers to create performant non-native apps. Based on the comparison points below, React Native has a slight advantage over Xamarin.

To further analyze Xamarin vs. React Native and understand how two frameworks with the same intention express themselves differently, keep reading!

First and foremost is a side-by-side comparison of Xamarin vs. React Native. Direct comparisons are often the best way to make a major decision between two choices.

Because cross-platform and hybrid frameworks are known for sacrificing performance in turn for convenience, this category is paramount to your final decision.

Though both Xamarin and React Native offer near-native performance, Xamarin runs the fastest code on Android and iOS and has a user interface (UI) for using native tools.

Popularity does not always determine the value of software but it does have a big influence on how others interact with the software. Characteristics like a large talent pool, comprehensive tooling, and a great community often revolve around the popularity of the software.

For the same reasons as noted above, you can expect that React Native has a larger and more supportive community than Xamarin.

When React Native was younger, its community was limited. However, as the framework grows and JavaScript frameworks in general garner more attention, it’s become easier and easier to spot fellow React Native developers.

Both Xamarin and React Native have pre-built components to enhance performance and the developer experience. But despite React Native’s live reload feature, the framework as a whole pales in comparison to Xamarin.

Xamarin.Forms along with Xamarin.iOS and Xamarin.Android empowers developers to create platform-specific native UI components. In this way, Xamarin developers can get closer to native-like performance than React Native developers might be able to.

Related reading: What Does a React Developer Do?

Most open-source frameworks are free. But unfortunately, Xamarin can’t claim that label. Xamarin does have a free version, but its features are limited.

JavaScript and its frameworks, including React Native, use just-in-time (JIT) compilation. Though compiled languages typically run faster than interpreted languages because they are converted to machine code before execution, JIT compilation may be the best of both worlds.

TLDR: Xamarin vs. React Native shows that both frameworks have similar compilation styles but Xamarin offers a compiler well-suited for both iOS and Android. Xamarin wins.

Xamarin and React Native are free. But Xamarin is only free for individuals and small companies. A Visual Studio Enterprise annual edition can cost nearly $3000. This, of course, makes the entirely free React Native much more appealing. 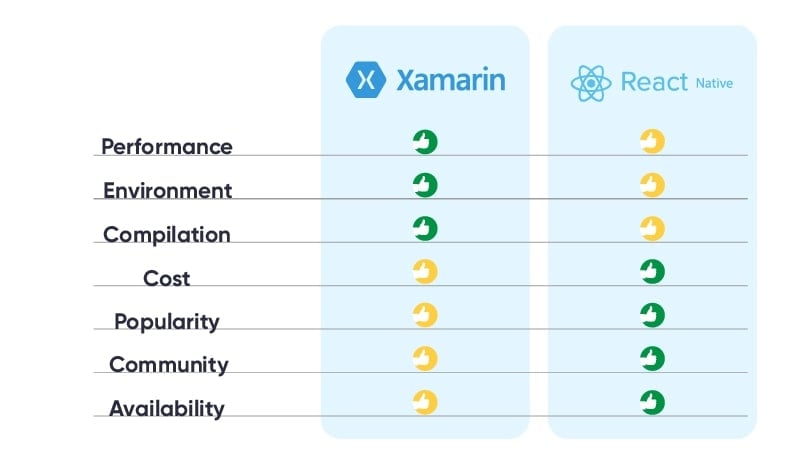 Other language comparisons that may interest you:

Need to know a bit more about Xamarin and React Native before you make your decision? No problem. Trio has you covered just below.

Xamarin is a Microsoft software for building cross-platform Android, iOS, and Windows apps. The software is a sub-platform of .NET, a software framework providing tools and libraries for building apps.

Really, Xamarin is an extension of .NET, but the platform is specifically designed for mobile app development. You can consider all of these platforms as part of the Microsoft C# ecosystem.

C# is a programming language developed by Microsoft. The language was inspired by C and C++. However, it has better class libraries and support for object-oriented programming. The language features multiple programming paradigms and is statically typed with lexical scope.

The .NET Framework relies on C#, F#, and Visual Basic. Xamarin uses C#. With Xamarin, you can share up to 90% of your codebase from platform to platform.

For mobile app developers, a large concern is that cross-platform development – that is, sharing codebases between Android and Apple operating systems (OSs) – will impede performance. Frameworks like Xamarin endeavor to mitigate that concern.

Because Xamarin allows developers to use C# rather than the host languages of mobile operating systems, like Java for Android and Swift for iOS, developers can save time in development while also getting a native-like performance.

What Are the Advantages of Xamarin?

Xamarin vs. React Native wouldn’t be a fair fight without an adequate comparison. The following Xamarin advantages should help you compare the two frameworks.

Because Xamarin uses C# and is part of .NET, mobile app development is far easier than otherwise. In addition to your code working on multiple platforms, you still get the benefit of native-like performance.

Xamarin.Android and Xamarin.iOS give developers access to relevant software development kits (SDKs) for Android and iOS. And Xamarin.Essential is a library of overlapping native application programming interfaces (APIs).

For the same reason, Xamarin is efficient. As codebases can be shared from one mobile operating system to the other, cross-platform development means saving time and costs.

With Xamarin, you also use a single technological stack as you can write both UIs and the application’s core logic in C#.

Xamarin.Forms is a means of maintaining apps by updating source code. The updates will automatically be applied to all solutions.

Xamarin Test Cloud and Xamarin Test Recorder can run automated tests so you can run bugs before they appear in a stable release.

Since Xamarin is backed by .NET, it has lots of comprehensive tooling in support of an extensive developer experience.

Aside from the aforementioned Xamarin libraries, Xamarin lets you use CSS and other libraries, unlike React. There is also real-time collaboration via Visual Studio Live Share, as well as code clean up and intelligent suggestions.

When Is the Use of Xamarin Recommended?

Unsurprisingly, Xamarin should be used for building mobile apps. The platform provides a means to build mobile apps without utilizing OS-specific languages like Swift or Java.

Ultimately, the advantage of this is more efficient and holistic development as codebases can be shared cross-platform.

What Apps Use Xamarin?

Hopefully Xamarin vs. React Native doesn’t come down to a popularity contest, but it can be helpful to know where exactly Xamarin is used and why.

The United Parcel Service (UPS) needs little to no description. It’s the company delivering some large percentage of packages worldwide.

The UPS mobile app allows you to create shipments easily on the go. Thanks to Xamarin, developers were able to increase their productivity while making the app.

FreshDirect is a leading online grocery delivery service specializing in local and organic produce as well as fresh seafood, custom cuts of meats, and chef-made meals.

Its corresponding mobile app shifted to C# from Objective-C and Swift in early 2015 to speed up time-to-market.

While the name Olo might not be the most recognizable, you’ve probably indirectly benefited from the app more often than you might think. Olo creates custom ordering apps for a number of restaurants including WingStop, Applebee’s, and Five Guys.

The DevOps team has used Xamarin from the very beginning to ensure a rapid time-to-market and a seamless user experience.

What Is React Native?

React Native is a mobile application framework developed by Facebook. The framework is based on React, a JavaScript library for building UIs.

Co-founder of Facebook Mark Zuckerberg maintained that, “The biggest mistake we made as a company was betting too much on HTML as opposed to native.” In other words, Zuckerberg realized that in using HTML5 to develop Facebook’s mobile version, he was sacrificing performance.

His solution was to build a new framework entirely for mobile development. React and React Native share the same base similarities. Both frameworks are explicitly concerned with state management and additional libraries must be used to render further functionality.

States control the behavior of an app at a certain time. State management refers to the management of UI controls like OK buttons, text fields, and whatever else responds to user interaction.

Because everything is written in JavaScript, this enables code sharing from one platform to the next. And developers do not need to write in Android or iOS-specific languages.

This mode of development is called hybrid app development, a convenient means of getting near-native performance without actually having to use native languages.

React Native developers are in high demand. If you want one for yourself, Trio knows just where to look. Have at it.

What Are the Advantages of React Native?

Get a good idea of how React Native pulls its own weight and take a look at the advantages of using React Native.

React Native uses a similar architecture to React which is modular in nature. With this modularity, it is easy to differentiate between varying functionalities via independent code blocks. This allows for ease of development.

Though React Native first started as a project for Facebook’s personal use, when it was released as an open-source project, there was no going back. React Native’s community is large and therefore supportive, making mobile app development really feel like a collective effort.

Just like Xamarin, React Native promises code reusability at high percentages. Of course, the product is saving time and money.

Another perk driving React Native’s success in the cross-platform development industry is how it divvies up processing power.

Some features of React Native stand out more than others. For example, many React Native developers cherish one of the framework’s features called ‘hot load’ or ‘live reload’ where updates to your codebase can be seen immediately.

When Is the Use of React Native Recommended?

Not unlike Xamarin, React Native has a very specific use case. That is, developers should use the framework for building cross-platform mobile apps.

By using just JavaScript throughout your mobile app development, your project can be built faster and cheaper than using traditional native languages.

What Apps Use React Native?

Xamarin vs. React Native can only be contrasted directly if you observe how they stand on their own imaginary two feet. In that same vein, here are some major apps that rely on React Native.

Given that Facebook developed React Native, it shouldn’t be shocking that they use their own software. For context, Facebook is a huge social networking website and mobile app.

Ironically, React Native was born out of a hackathon project that prioritized advantages such as quick iterations and having a singular development team.

Walmart is a retail corporation with a sizable chain of grocery markets and department stores. The corporation chose React Native in an attempt to improve customer experience. As a result, they found almost 100% of their codebase could be shared between platforms.

Wix is an online company where you can build and host websites quickly and easily. Using React Native improved Wix’s speed and agility where web development is involved. The company also created its own software for handling navigation called wix-react-native-navigation.

When you look at the framework side-by-side, it’s clear that React Native does better than Xamarin in the majority of categories. Yet a business that prioritizes performance and compilation times over other factors might go with Xamarin instead.

Whichever way it may be, remember that Trio has the tools and developers you need to see your project to completion. And we’ll also consult with you to help you choose the software that will give you exactly what you need.

Xamarin is a Microsoft software for building native Android, iOS, and Windows apps. The software is a sub-platform of .NET, a software framework providing tools and libraries for building apps.

What is React Native?

React Native is a mobile application framework developed by Facebook. The framework is based on React, a JavaScript library for building user interfaces (UI).

What apps use Xamarin?

Some popular applications using Xamarin are UPS, FreshDirect, and Olo.

What apps use React Native?